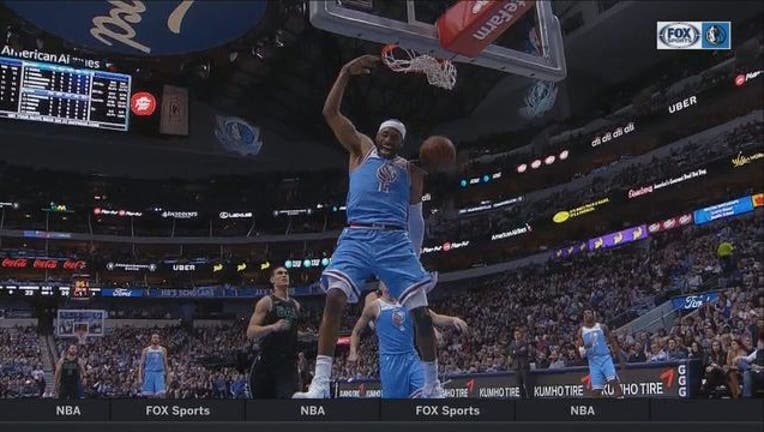 DALLAS (AP) - Zach Randolph scored 22 points, and the Sacramento Kings used a big first half to beat the Dallas Mavericks 114-109 on Tuesday night.

Bogdan Bogdanovich added 19 points for the Kings, who have won four of five in Dallas after losing 22 in a row here from 2003 to 2016. Seven Kings scored in double figures.

J.J. Barea led the Mavericks with 19 points, and Harrison Barnes and Dwight Powell each scored 18.

Randolph scored 18 in the first half, helping Sacramento to a 65-44 lead at the break. The Kings dominated the paint in the first two quarters, scoring 40 points, while the Mavericks shot just 35 percent.

The Kings extended the lead to 26 with the first five points of the second half before Dallas put together a 17-3 run fueled by four 3-pointers.

But Sacramento had an 88-71 advantage after three, and then opened the final quarter with a 9-0 run to match its largest lead. The Mavericks kept chipping away for the entire quarter and closed with a 30-11 run to make the final score close.

Eight minutes into the game, Randolph had outscored the cold-shooting Mavericks all by himself, 11-8.

Dallas coach Rick Carlisle replaced his entire lineup at one point in the second quarter, only to see the Mavs get beaten twice by the Kings for offensive rebounds that set up Garrett Temple's 3 that made it 46-28.

Kings: Carlisle said the 41-year-old Vince Carter's longevity was "beyond belief. ... He's still playing at a good level. You've got to guard him." Carter played for the Mavericks from 2011-14.

Mavericks: Dirk Nowitzki, Wesley Matthews and Barea returned after missing Sunday night's loss to Houston due to various minor injuries. ... Matthews became the seventh Dallas player to hit 500 3-pointers with the team with his two in the first half. ... Dennis Smith Jr. scored 17 points. Smith will join three others in the Verizon Slam Dunk contest Saturday in Los Angeles during All-Star weekend.

Kings: At Houston on Wednesday for the second half of a back-to-back.

Mavericks: Nine days off before visiting the Lakers on Feb. 23.