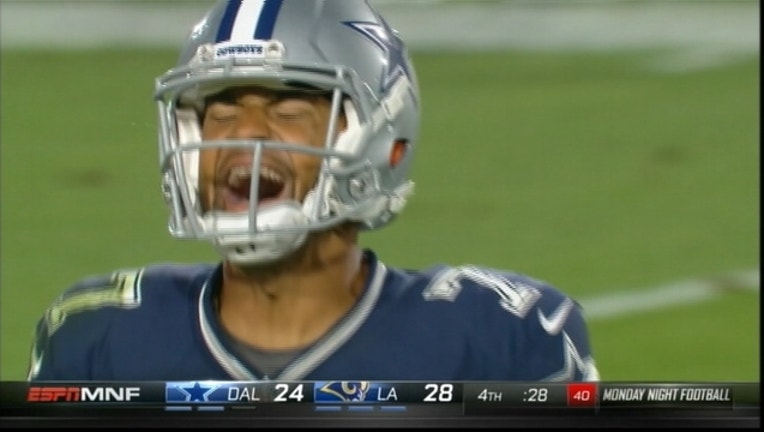 LOS ANGELES (AP) — Dallas' Dez Bryant caught a 10-yard touchdown pass, but the Los Angeles Rams earned a win in their homecoming when Sean Mannion threw a 9-yard touchdown pass to Aaron Green with 1:54 remaining for a 28-24 comeback over the Dallas Cowboys at the LA Coliseum on Saturday.

Bryant had two receptions for 28 yards, including a leaping catch on the sideline against cornerback Coty Sensabaugh for 18 yards. He played one series before leaving the game.

Rams running back Todd Gurley and defensive end Robert Quinn also did not play, as a crowd of 89,140 saw Cowboys wide receiver Lucky Whitehead score on a 101-yard kick return to welcome the NFL back to Southern California after a 22-year absence.

No. 1 overall draft pick Jared Goff struggled after replacing Case Keenum early in the second quarter, completing 4 of 9 passes for 38 yards and an interception.

After being hit by Cowboys linebacker Derek Akunne, Goff's second pass was a wobbly throw that was easily picked off by Mark Nzeocha. Goff had two other passes dropped by rookie receivers Pharoh Cooper and Michael Thomas, and the California alum was sacked once.

Keenum started and played three series, going 6 of 7 for 58 yards. Benny Cunningham scored on a 14-yard run with 1:33 left in the first quarter for the Rams' first points in the stadium where they first played in 1946 after moving from Cleveland until moving to Anaheim at the end of the 1979 season.

Mannion threw three touchdown passes in the second half to rally the Rams.

Cowboys rookie Dak Prescott started in place of Romo and made a strong case to back him up after Kellen Moore broke his ankle in practice last week. Prescott was 10 of 12 for 139 yards and two touchdowns, with both incompletions coming on drops by Geoff Swain.

The fourth-round pick out of Mississippi State looked poised behind the strong Cowboys offensive line, finding Terrance Williams for a 32-yard touchdown with a perfectly placed throw over Lamarcus Joyner.

Cowboys: Running back Darius Jackson showed some nice burst, rushing for 47 yards on 13 carries. But most of the Cowboys' draft class was unavailable. Second-round pick Jaylon Smith is recovering from a serious knee injury the linebacker suffered in the Fiesta Bowl. Defensive tackle Maliek Collins (foot) and end Charles Tapper (back) are also dealing with injuries, but should be available later in the preseason.

Rams: Fourth-round pick Tyler Higbee has been the star of training camp and kept it up with five catches for 49 yards. The tight end from Western Michigan was equally effective whether working split out wide, where he broke a tackle on a 14-yard reception from Goff, or on the line of scrimmage. Higbee didn't get to show off his aptitude in the red zone, but looks like a valuable addition to an offense that lacks reliable options.

Cowboys: Jamiel Showers had his moments in the second half, including a 47-yard completion to Vince Mayle after narrowly escaping a sack, but Prescott's performance looks to have justified the decision by owner Jerry Jones not to add a veteran quarterback after Moore got hurt.

Rams: The rebuilt secondary struggled in its first outing after losing free agent cornerback Janoris Jenkins to the New York Giants. Seeing Sensabaugh struggle to contain Bryant wasn't a surprise, but seeing Williams and Cole Beasley running free was troubling. Joyner seems to be a better fit at nickel back, while Sensabaugh's issues mean a starting cornerback job is almost certainly E.J. Gaines' to lose.

Cowboys: "I think the best thing about Dak is that he is extremely calm," Bryant said of Prescott. "It's like he's been here before. He's not playing like a rookie. He is going to be very good; he's special."

Rams: "The crowd is amazing," linebacker Cameron Lynch said. "This is great — you definitely can't complain."