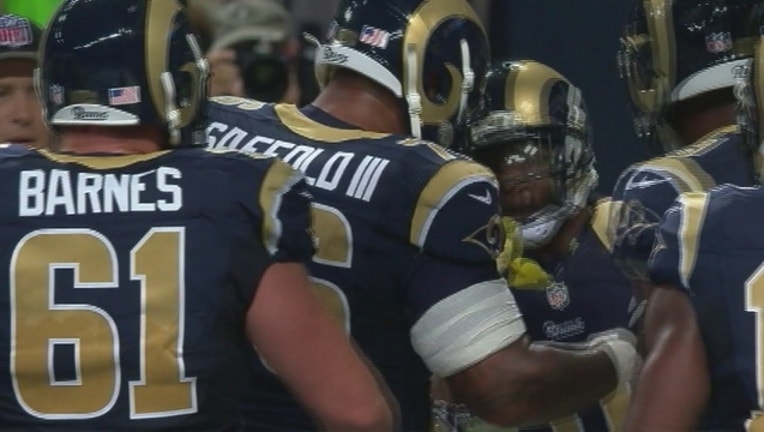 IRVINE, Calif. (AP) — Technically, the Los Angeles Rams' game Saturday with the Dallas Cowboys is just a preseason opener at a temporary home for a relocating team that hasn't made the playoffs in 11 years.

But that temporary home is also the team's traditional home, the Los Angeles Memorial Coliseum, where they'll play as the host team for the first time in 36 years, giving the day huge sentimental and symbolic importance for fans.

"I'm really ecstatic to see my team back on the field in LA," said longtime fan and local native Dan Salcedo.

For now fans have to watch a rebuilding Rams team, though with reasons for excitement including explosive young running back Todd Gurley and No. 1 overall draft pick quarterback Jared Goff, who for now will back up starter Case Keenum.

The young players have been getting the Hollywood treatment already.

The team's training camp is the focus of this year's "Hard Knocks" on HBO, which had its red-carpet premiere this week.

Hip stars like rapper Kendrick Lamar visited the team at training camp, and their games are likely to become a new version of the Lakers' sideline for celebrities.

Their jerseys, hats and stickers have begun flourishing on store shelves and car bumpers alongside Lakers and Dodgers gear, and tens of thousands have already watched the team at camp.

But that doesn't mean the Rams didn't leave a hole that they've now begun to refill.

"I was heartbroken when they left," said Salcedo, 40, who wore an old-school Rams Jack Youngblood jersey as he attended a team scrimmage at the Coliseum last week. "When they announced they were coming back I was ecstatic."

There are also plenty of young fans who never knew the LA Rams, many of whom are just as excited as the old-timers at the new-old franchise coming to town.

Refugio Gonzalez, 26, who lives in nearby Pomona, is feeling especially lucky as he adopted the team based solely on their merits back in 1999 while they were in St. Louis.

"I turned on the TV one day and they were playing the Titans in the Super Bowl," Gonzalez said at the scrimmage. "They won, and the next season I started following them and fell in love with the team and the players. Marshall Faulk, Kurt Warner, Tory Holt, Isaac Holt. The Greatest Show on Turf. Ever since then I started following them, became a big fan, can't miss the games on TV and now they are here in Los Angeles. Having the opportunity to come see them in person, it's an awesome experience."

It'll be a season's worth of sentimental games at the Coliseum, where the Rams will play until their state-of-the-art new home is built in Inglewood. Plenty of former USC players and coaches, including Seattle Seahawks coach Pete Carroll, will get to return to the Coliseum, which the Trojans call home.

The Rams played at the Coliseum — and won four NFL championships there — from 1946 until 1980. They then played their next 15 seasons at Angel Stadium in Anaheim before moving on to St. Louis in 1994.

The Cowboys are a fitting opponent for the homecoming. They have a typically large following in a town that has lacked an NFL team, they have long held their training camp in Southern California and owner Jerry Jones was among the NFL power brokers who most strongly fought for returning a team to the LA area.