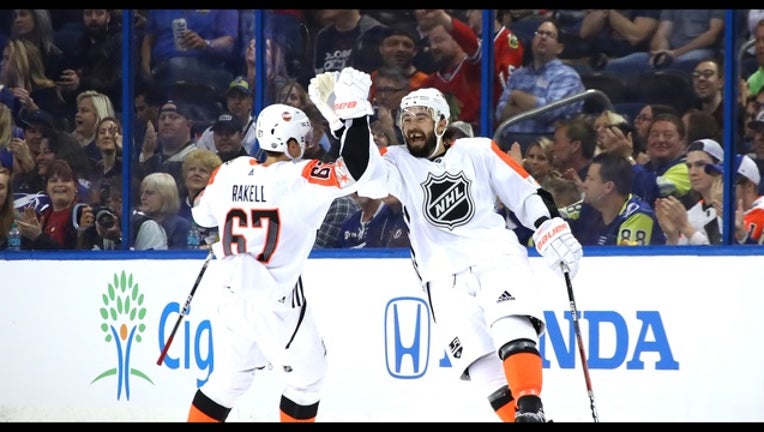 Rickard Rakell of the Ducks and Drew Doughty of the Kings celebrate after a goal during the 2018 Honda NHL All-Star Game between the Central Division and the Pacific Divison on January 28, 2018 in Tampa, Florida. (Photo by Bruce Bennett/Getty Images)

Pacific goalies Marc-Andre Fleury and Mike Smith teamed to allow just four goals in the two games their team captured to claim the $1 million shared by the winners of the four-team divisional tournament played in an entertaining three-on-three format.

The Canucks' Boeser, the only rookie among 15 first-time All-Stars, also had a goal in the Pacific's 5-2 semifinal victory over the Central Division and named game MVP.

Mike Green had two goals for the Atlantic, one off both Fleury and Smith in the final.

All-Star weekend began with a free outdoor concert headlined by Fitz and the Tantrums and also featured a three-day fun fest for fans, as well as the annual skills competition that wrapped up Saturday's festivities.

Adding spice and a unique flavor to the experience was Tampa's annual Gasparilla Pirate Invasion, which drew what officials estimated as an additional 200,000 people to the downtown waterfront for a parade and other activities.

Players walked the red carpet, posing for pictures and signing autographs before entering Amalie Arena for the first All-Star game played in Tampa since 1999, the last of Wayne Gretzky's 18 appearances in the midseason showcase that shifts to San Jose, California, next season.

With the Lightning's Jon Cooper coaching the Atlantic Division, and the team with the NHL's best record represented by a league-high four players, the sellout crowd of 19,092 roared its approval when the Atlantic-Metropolitan semifinal began with goalie Andrei Vasilevskiy, plus forwards Nikita Kucherov, Brayden Point and Steven Stamkos on the ice at the same time.

Kucherov's hat trick in the 7-4 semifinal victory was the first for an All-Star game since the NHL adopted the three-match, three-on-three tournament format in 2016.