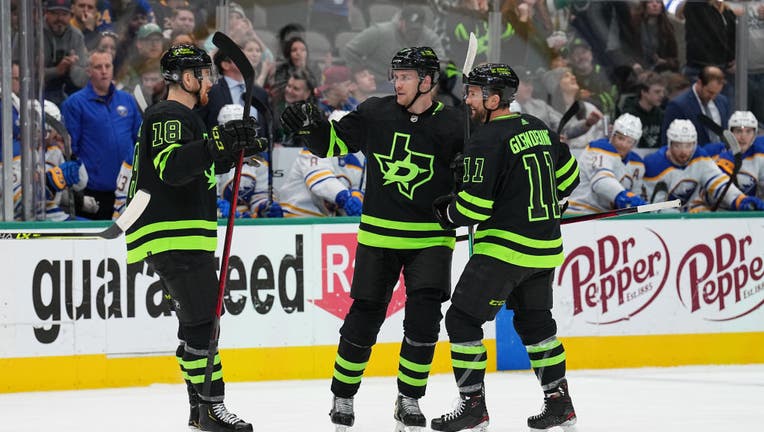 DALLAS, TX - FEBRUARY 27: Michael Raffl #18, Radek Faksa #12 and Luke Glendening #11 of the Dallas Stars celebrate a goal against the Buffalo Sabres at the American Airlines Center on February 27, 2022 in Dallas, Texas. (Photo by Glenn James/NHLI via

Raffl scored the game's first goal midway through the first period, his first since Jan. 6, and added his sixth of the season late in the second period. It was the 33-year-old's third multi-goal game in 560 NHL appearances.

Roope Hintz and Denis Gurianov also scored for the Stars, who have points in seven of their last nine games (6-2-1).

Tage Thompson and Cody Eakin scored for the Sabres, who are 0-6-0 in their last six games. Craig Anderson stopped 27 shots.

Raffl, who signed as a free agent last July, deflected a shot from Radek Faksa just beyond the right circle for the game's first goal at 15:43 of the first period. He scored at 16:16 of the second period for a 3-1 lead on a second-effort shot at the crease after Anderson initially stopped a shot from Tyler Seguin.

Hintz gave Dallas a 2-0 lead 6:34 into the second period, beating Anderson between the pads all alone on the doorstep for his team-high 23rd goal. Joe Pavleski assisted with a pass from the corner boards.

Gurianov deflected a shot from Esa Lindell 8:56 into the third period with 5 seconds left in a power play.

Thompson scored on a wrister from the right circle at 8:23 of the second period to pull the Sabres within 2-1, his eighth goal in the last eight games.

Eakin, who played five seasons with Dallas before going to Vegas in the 2017 expansion draft, hit a 17-foot wrister at 14:02 of the third period.

Sabres defenseman Rasmus Dahlin crumpled behind the Buffalo net midway through the first period after being hit by Seguin's stick between the legs. Dahlin was helped to the bench but didn't miss a shift. ... Dallas rookie defenseman Thomas Harley had the secondary assist on Hintz's goal for his first career NHL point. ... Buffalo defenseman Henri Jokiharju missed his second consecutive game with a lower-body injury.

Sabres: At Toronto on Wednesday to complete a season-long five-game trip.