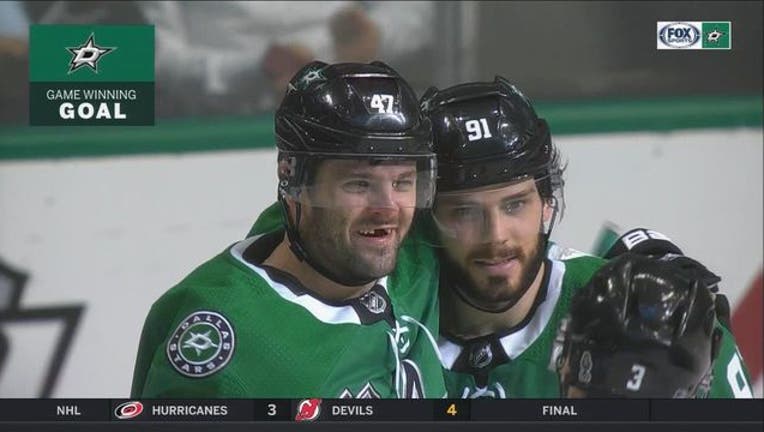 DALLAS (AP) - Alexander Radulov sent a sigh of relief through the arena on Tuesday night.

Radulov scored 40 seconds into overtime as the Dallas Stars beat the Philadelphia Flyers 3-2 to end an eight-game winless streak.

On a two-man breakaway, Tyler Seguin passed from the right side across to Radulov, who beat Philadelphia goalie Petr Mrazek for the game-winner.

"I was going in shooting the whole time," said Seguin, whot got his 500th career point on the play. "but when I knew it was Radulov and the goalie was probably all over me. I knew he wasn't going to miss that."

The Stars were 0-6-2 during their longest stretch without a win since moving to Dallas in 1993. With five games left, the Stars are five points out of the Western Conference's final playoff berth.

"For everybody it's relief, and now you can move forward," he said. "We can't live on frenetic effort every shift with no structure. ... Today didn't have much structure in it."

Seguin had two assists and Radulov had one. Kari Lehtonen stopped 31 shots to end a personal seven-game winless streak.

"It wasn't a pretty one today, but Kari had some huge saves, you know," Radulov said. "The guys blocked shots, and at some point we had luck too."

Philadelphia extended its points streak to six games (3-0-3) and remained two points ahead of New Jersey for the Eastern Conference's top wild card.

"We don't like the way we gave up the second point, which we do too much in OT," Flyers coach Dave Hakstol said. "Sometimes when you try to do too much 3-on-3 things like that happen."

Radek Faksa had the game's first goal just past midway into the first period for Dallas and Brett Ritchie tied it 2-2 on the power play midway through the second.

In between, Travis Konecny and Ivan Provorov scored for Philadelphia, with Shayne Gostisbehere assisting on both goals. For 38 minutes after that, Lehtonen gave up nothing.

"Things have been tough and now we just kept going and get rewarded at the end, so it was sweet," Lehtonen said. "The fun part was that they were getting shots and I was able to keep making the saves. It goes to focus on the next shift and believe that we are gonna get that one or two chances, able to score a goal."

Mrazek made 20 saves for the Flyers.

Until Radulov scored, there wasn't much indication that Dallas could win.

"We had five people for 2 1/2 periods staring at the puck and all moving towards the puck, trying to help," Hitchcock said. "It's a little bit like kids' soccer."

Faksa scored with 9:10 remaining in the first. Antoine Roussel's shot from above the left faceoff circle went wide left, bouncing off the boards and out to Faksa at the right of the net. He put in a backhand off Mrazek's left skate as the goalie scrambled to get back to that side.

Konecny tied it with 3:09 left in the opening period with a wrist shot from just inside the right circle that went under the crossbar.

Dallas had seven of the first eight shots on goal, but Philadelphia outshot the Stars 10-3 for the remainder of the first period.

The Flyers took the lead just 2:03 into the second. Wayne Simmonds passed to Provorov in the slot. Before he fell to the ice, Provorov put a wrist shot inside the left goalpost.

It took the Stars just 19 seconds into their first power play of the second to tie it. Standing just to the left of the net, Ritchie tipped in Radulov's shot from the right circle.

NOTES: Konecny has 17 of his 23 goals in the last 31 games. ... Claude Giroux's assist on Konecny's goal was his eighth in the last four games and 66th of the season. ... Radulov reached 40 assists for the first time in his career. ... Before Ritchie's goal, Philadelphia had killed 12 of 13 penalties over six-plus games.

Flyers: Finish a three-game trip on Wednesday at Colorado.

Stars: Visit Minnesota on Thursday before returning for the home finale on Saturday vs. the Wild.