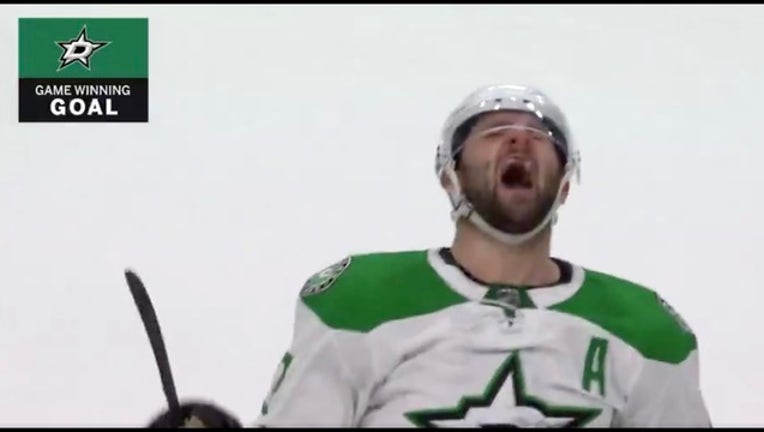 ST. PAUL, Minn. (AP) - Alexander Radulov scored with 10 seconds on the clock in overtime to give the Dallas Stars a 2-1 win against the Minnesota Wild on Saturday night.

Ben Bishop made 30 saves for Dallas, and Jamie Benn finally beat Minnesota goaltender Devan Dubnyk 1:58 into the third period for his eighth goal in the past 14 games.

Dubnyk stopped 25 shots for the Wild, who have lost four in a row and nine of 12. Jason Zucker pushed the game to overtime with his 10th goal of the season with 2:03 left in regulation.

A wild, back-and-forth overtime finally turned in the Stars' favor when Radulov wristed a shot between Dubnyk and the post for his 11th goal. Dallas won for the second time in seven games.

Zucker finally ended an offensive slump for the Wild, who have three goals in the last four games. Eric Staal's shot was stopped and Mikael Granlund tried another one on the backside while falling backward before the puck trickled out to Zucker, who whipped it into an open net.

Minnesota was 0 for 3 on the power play against Bishop and is scoreless on its last nine chances with the man advantage since going 4 for 4 on Dec. 11.

The Wild had a four-minute power play after Dallas defenseman Roman Polak started a fight with Minnesota center Luke Kunin. Polak was assessed roughing, instigator and 10-minute misconduct penalties, but the Wild mustered just one shot on the power play.

NOTES: Minnesota D Matt Dumba missed his third game with an upper-body injury and the team announced he will have surgery next week. There is no timetable for his return. ... Dallas forward Jason Dickinson left with an upper-body injury and didn't return. ... C Jason Spezza returned for the Stars after missing two games with an illness. C Martin Hanzal didn't travel with the team to Minnesota. ... Wild forward Joel Eriksson Ek was a healthy scratch for the second time this season. ... It was the 4,000th regular-season game in franchise history for the Stars. The first 2,061 were played as the Minnesota North Stars.

Stars: Return home against the New York Islanders on Sunday.

Wild: Play at Chicago on Thursday.