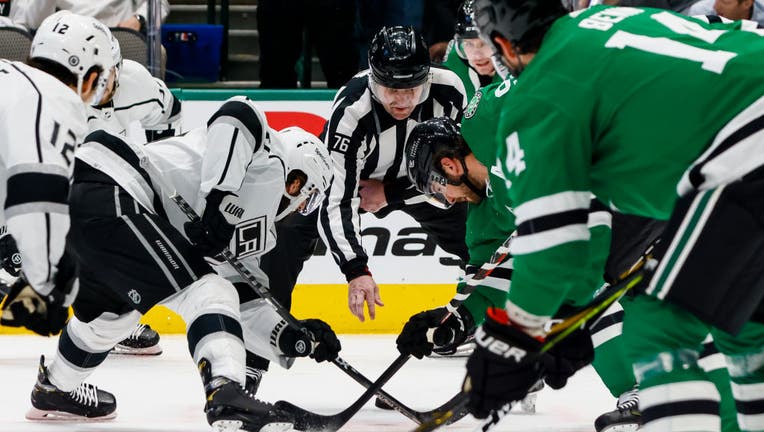 DALLAS, TX - MARCH 02: NHL linesman Michel Cormier (76) drops the puck for a face-off during the game between the Dallas Stars and the Los Angeles Kings on March 2, 2022 at the American Airlines Center in Dallas, Texas. (Photo by Matthew Pearce/Icon

Radulov and Ryan Suter scored in the final minute of the period, after Luke Glendening and Jason Robertson connected, to help Dallas improve to 5-1-1 in its last seven games and 30-20-3 overall.

"It feels like it was yesterday," said Radulov, whose NHL career began in 2006 and has been broken up by eight seasons in Russia’s KHL. "Time flies."

Jake Oettinger made 28 saves to improve to 15-3-0 at home this season.

Kings rookie Arthur Kaliyev had his first two-goal game in the NHL, Phillip Danualt also scored and Cal Petersen stopped 39 shots. Kaliyev nearly notched his first NHL trick with the tying goal in the final minute when his shot bounced up over Oettinger and off the goalie’s back inches from the net.

Los Angeles had lost two straight after winning five in a row. It had won its previous six road games.

"We lost a 60-minute game in 20 minutes," said Kings assistant coach Trent Yawney, who ran the team for the fourth consecutive game with head coach Todd McLellan in the NHL’s COVID-19 protocols. "And it was mostly self-inflected. We turned the puck over, and we took penalties."

Dallas trailed 3-1 after Kaliyev’s second goal, a power-play strike with 6:43 left in the second period.

"I thought we were in a good spot, and then it got away from us," said Kaliyev, a second-round draftee in 2019. "Hopefully, I can bring that confidence to the next game."

Robertson, a southern California native, started the Stars’ rally with 5:47 to go with a shot between Petersen’s pads. Suter scored from the left point with 59 seconds left, and Radulov converted a rebound on a power play with 13 seconds to go.

"We got the momentum going there and kind of never looked back," said Suter, who scored his fifth of the season and snapped a 14-game goals drought. "It was a grind early, and then kind of found our way."

Danault, who joined Los Angeles as a free agent last July, has a career-high 16 goals with six in his last 10 games and 12 since Jan. 1.

The Kings are second in the Pacific Division with 65 points, five behind Calgary. Beginning with Wednesday’s game, they will play their final 32 games in 65 days.

The Stars hold the second wild card in the Western Conference with 63 points to tie Edmonton, Dallas having a game in hand.

"Somebody’s going to miss the playoffs when they’ve had a really good year," Bowness said.

SHOOT – THE STREAK IS OVER

Dallas outshot Los Angeles 43-31, which ended the Kings’ 21-game streak of outshooting opponents one game short tying the NHL record. The 1970-71 New York Rangers own the record. The 43 shots, with one added after the game ended, are the most allowed by the Kings this season.

Wednesday was Noche Mexicana at American Airlines Center, and the game was broadcast in Spanish for the first time in franchise history. Play-by-play was done by Octavio Sequera, part of the NHL’s Spanish language communications team and a former announcer for the Florida Panthers.

Kings: At Columbus on Friday night.

Stars: At Winnipeg on Friday night.