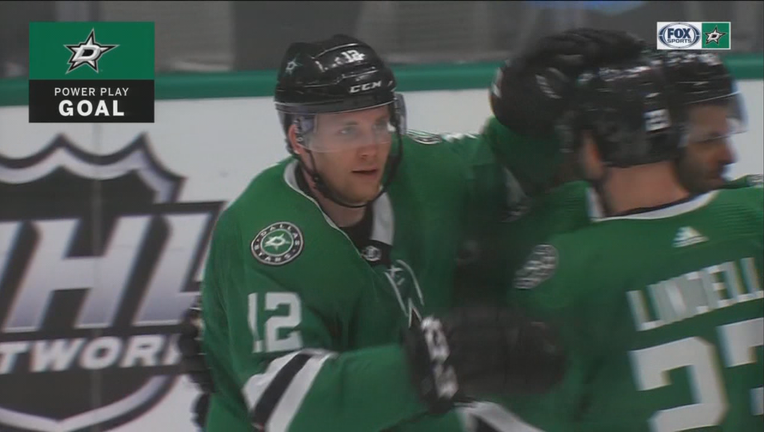 DALLAS - Radek Faksa kept hanging around the net, and was rewarded with two goals and even more cuts and scrapes on his nose.

Faksa doubled his season total with two goals off rebounds and the Dallas Stars won for the seventh time in eight games, beating the Colorado Avalanche 4-1 Tuesday night.

"I'm trying to go to the net every game," he said. "Luckily, I got two bounces tonight. You have to be patient and you will get rewarded later on."

"I just tried to hit one guy, and he turned and hit me with the elbow in the nose," Faksa said. "That was just an accident."

Jason Dickinson scored in the first period and Corey Perry added a goal in the third for Dallas, which never trailed. Ben Bishop made 36 saves, 21 in the third period.

J.T. Compher scored for the Avalanche, 0-4-1 in their last five games.

Colorado lost replay challenges after the Stars' first and third goals. The Avalanche contended that there was goalie interference on Dickinson's goal, and that Faksa's stick had broken before he scored his second goal. For losing the challenges, the Avalanche received six minutes in penalties.

"On the second challenge, it hit Faksa's stick, and you could see the stick break," Colorado coach Jared Bednar said. "I challenged that when he touched the puck, there should've been a stoppage since he played the puck with a broken stick."

Faksa and the replay officials saw the play differently.

"I tipped it back and then just saw the rebound, put it in," Faksa said, "and after that I saw a broken stick. So, I was sure it was a good goal."

Stars coach Jim Montgomery has reunited Faksa and Andrew Cogliano with Blake Comeau, playing in only his third game because of an injury in the season opener.

"I think that line of (Faksa), Cogliano and Comeau are excellent," Montgomery said, "both games they've played here together and will continue to play."

Dallas came out fast, taking the first 12 shots on goal and a 2-0 lead before Colorado's Nathan MacKinnon shot from the left faceoff circle into Bishop's pad at 16:23. The shot came during the Avalanche's second power play.

The Stars' first goal was all Dickinson. He was relentless in keeping the Avalanche in their own end, took the puck away from Samuel Gerard and scored unassisted on a shot 19 seconds in.

Faksa increased the lead to 2-0 at 5:46. He got his own rebound at the right side of the net and lifted the puck over and off the stick of Avalanche goalie Philipp Grubauer, who stopped 34 shots.

Colorado scored with 36 seconds left in the first, pulling within 2-1. Vladislav Kamenev dropped the puck for Compher high in the right circle, and he sent the puck just under the crossbar.

Faksa's second goal came on the power play at 10:54 of the second period.

NOTES: Dallas D John Klingberg didn't play in the third period because of a lower-body injury. ... LW Roope Hintz (lower body), the Stars' scoring leader, sat out the game. D Andrej Sekera missed his fourth straight game. Coach Jim Montgomery said Sekera hurt his chest, back, both hips and a knee when he crashed into the boards on Oct. 26. ... Dallas LW Blake Comeau played in his 800th career game. ... Dickinson's goal was his first point this season. He had gone without a goal for 14 regular-season games dating to April 2. . Colorado rookie D Cale Makar received his team-leading 11th assist on Compher's goal. C Nathan MacKinnon also had entered the game with 10 assists. ... Colorado had season highs of eight power plays (0 for 8) and seven penalty kills (6 for 7). ... The Stars' seven power plays were a season high. The eight penalty kills tied their season-high eight from Oct. 6 at Detroit. Dallas has had to kill at least five penalties in each of the last three games, allowing only one goal in 18 penalty kills. ... Faksa's two-goal game was his first since March 25 at Winnipeg.

Avalanche: Hosts Nashville on Thursday in the first of two home games.

Stars: At Winnipeg Jets on Sunday, the start of a four-game swing through Western Canada.