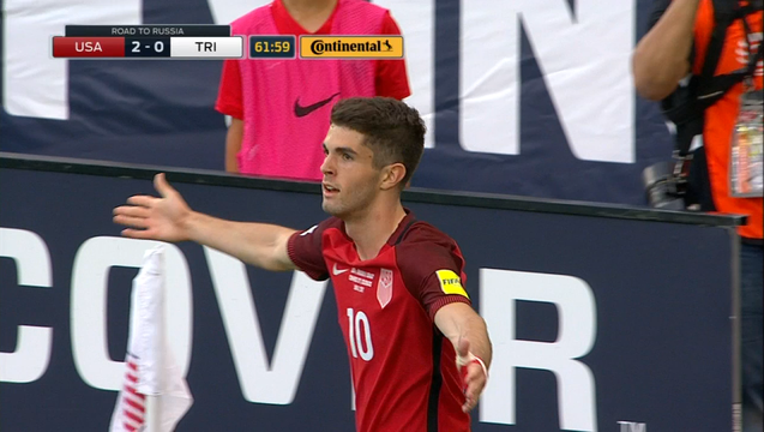 COMMERCE CITY, Colo. (AP) - After sliding to score a goal with his left foot, Christian Pulisic got back up, raced for a corner and glided across the grass on both knees.

Pulisic rescued the United States with a pair of second-half goals, and the Americans beat Trinidad and Tobago 2-0 on Thursday night to move into third place at the halfway point in the final round of World Cup qualifying.

Pulisic, an 18-year-old phenom from Hershey, Pennsylvania, ended a frustrating start for the U.S. offense with a goal in the 52nd minute, then added another in the 62nd.

"They were tough in the first half, definitely," Pulisic explained. "They had a lot of guys behind the ball and we couldn't work our way through them. Once we got the first one, it kind of opened up."

Pulisic made his international debut 15 months ago and has seven goals and five assists in 15 appearances, including four goals and three assists in his last four contests. He has scored or assisted on seven of the last eight American goals.

"He's having fun," U.S. coach Bruce Arena said. "He's a natural for the game. He sees the game very well."

After crashing to an 0-2 start in the hexagonal of the North and Central American and Caribbean region, the U.S. is back among the top three, which earn berths at next year's tournament in Russia. Mexico leads with 13 points, followed by Costa Rica (eight), the U.S. (seven), Panama (six), Honduras (four) and Trinidad (three).

The fourth-place team advances to a playoff against Asia's No. 5 nation.

The Americans have three wins and three draws since Arena replaced Jurgen Klinsmann as coach in November. The team's biggest test in Arena's second stint comes Sunday at Mexico.

"This was a big game. We needed the three points," said Jozy Altidore, who had the assist on Pulisic's second goal. "Now, we can go into Mexico and play with our minds clear."

Kenwyne Jones nearly put the Soca Warriors on top in the 33rd minute, beating goalkeeper Tim Howard to a cross but putting a header off the crossbar. Clint Dempsey, John Brooks and Altidore all had good chances, but T&T keeper Jan-Michael Williams made several sprawling saves.

"There was hardly any difference between both teams," Trinidad coach Dennis Lawrence said. "I think the altitude affected the tempo in the game. Both teams struggled with it. What cost us were errors in our end."

After helping Borussia Dortmund win last month's German Cup final, becoming the youngest American to earn a medal for a European club, Pulisic had another breakthrough moment with his second two-goal game for the U.S.

Darlington Nagbe went around a defender, dribbled upfield and passed to the top of the arc, where Dempsey flicked the ball ahead to the sprinting Nagbe. The midfielder put the ball back to right back DeAndre Yedlin, who sent a diagonal pass toward the far post. The onrushing Pulisic slid and scored from 4 yards.

Trinidad's Nathan Lewis beat Howard off the ensuing kickoff, but Yedlin had stepped up, causing an offside call that disallowed the goal.

Altidore was about 35 yards out when he split the defense with a bouncing pass that led to the second goal. Pulisic burst past Kevan George and slotted in a right-footed shot from about 10 yards to Williams' short side.

Dempsey remained one from tying Landon Donovan's American record of 57 international goals. He was subbed out in the 61st minute for Kellyn Acosta and had an angry look.

"He wants to be on the field," Arena said. "However, my job is to do what I think is right for the team, to position us to win a game. I understand that. He's a very competitive guy. We talked about it. He's OK. He's got a real competitive edge to him."

The U.S. remained unbeaten against Trinidad in home qualifiers, winning nine matches and drawing one while outscoring the Soca Warriors 21-2 - including 17 in a row since 1989.

The game at Dick's Sporting Goods Park is at about 5,200 feet, which will prepare the Americans for Sunday night's qualifier at Mexico City's Azteca Stadium, which is around 7,820 feet above sea level.

"Mexico, they're a good team and not easy to beat at home. It's going to take a lot," Pulisic said. "But I think with the guys we have and the confidence we have, there's no reason why we can't do it."

Notes: Mexico beat visiting Honduras 3-0 on goals by Oswaldo Alanis in the 35th minute, Hirving Lozano in the 63rd and Raul Jimenez in the 66th, making it a happy 55th birthday for El Tri coach Juan Carlos Osorio. ... Costa Rica was held to a 0-0 tie at home by Panama, ending the Ticos' 10-game home winning streak in qualifying. Costa Rica defender Giancarlo Gonzalez was given a red card in the 54th minute.