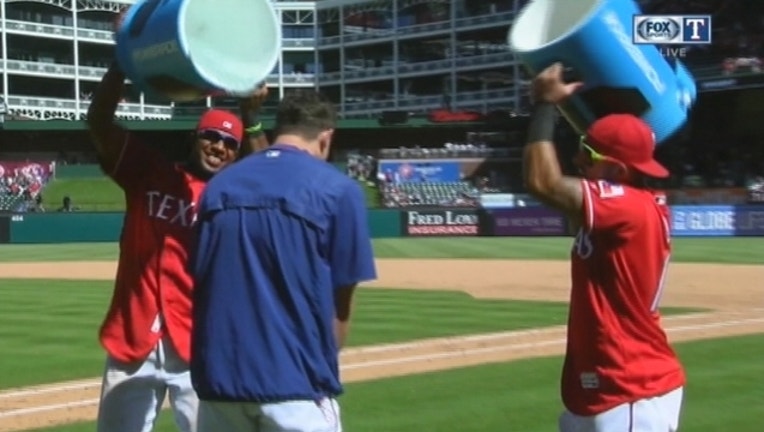 ARLINGTON, Texas (AP) — Jurickson Profar hit a tiebreaking single in a three-run fifth inning and the Texas Rangers beat the Seattle Mariners 3-2 Sunday, sweeping a three-game series between the top two teams in the AL West.

Profar, who had two hits, was in his second game at designated hitter as the replacement for benched slugger Prince Fielder.

Profar, the team's former top prospect, filled in when second baseman Rougned Odor served a seven-game suspension. Profar now has hits in all nine games with a .390 average in the leadoff spot since he was recalled from Triple-A Round Rock.

Closer Sam Dyson pitched a perfect ninth for his seventh save in eight chances as the Rangers moved three games ahead of the Mariners after a series that started with the teams tied for the division lead.

Two of the three runs against Hisashi Iwakuma (4-5) were unearned in the fifth, when the Mariners made two errors.

Odor, in his second game back from the suspension for punching Toronto's Jose Bautista in a May 15 brawl, started the decisive inning by sliding past the diving tag of first baseman Dae-Ho Lee on a bunt single.

Elvis Andrus reached on shortstop Luis Sardinas' error and scored the tying run when he made left fielder Stefen Romero think he wasn't going to try to score on a shallow fly ball. Andrus broke from a trot into a sprint just as Romero was about to make an easy toss in, and the lofty throw skipped past catcher Chris Ianetta.

Romero overran Profar's single for an error when he charged the ball trying to set up for a throw to get Jared Hoying, who scored from second for a 3-2 lead.

Mariners: CF Leonys Martin (strained left hamstring) is close to going on a rehab assignment, likely this week with Triple-A Tacoma. He visited his old teammates in the Texas clubhouse before the game, prompting Fielder to yell at him jokingly to "get out."

Mariners: LHP James Paxton (0-1, 7.36) makes his second start filling in for injured ace Felix Hernandez in the opener of a four-game series against Cleveland at home.

Rangers: 36-year-old RHP Colby Lewis (5-0, 3.09), off to the best start of his career, faces Houston and tries to become the first member of Texas' season-opening rotation to open at 6-0 since Alexi Ogando in 2011.