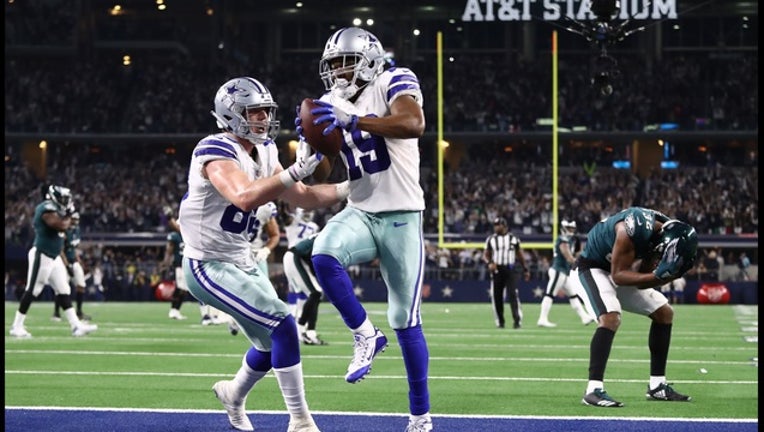 Amari Cooper #19 of the Dallas Cowboys celebrates with Blake Jarwin #89 after a touchdown against the Philadelphia Eagles in overtime for a 29-23 win at AT&T Stadium on December 09, 2018 in Arlington, Texas. (Photo by Ronald Martinez/Getty Images

The new No. 1 receiver for the Cowboys shook up the NFC East race, too.

Prescott threw his third touchdown pass to Cooper on the first possession of overtime, and the Cowboys took a big step toward the division title with a 29-23 victory over the Philadelphia Eagles on Sunday.

On third down, Rasul Douglas tipped the pass into the air by getting inside the slant route, and Cooper grabbed it and had a clear path to the end zone from the Philadelphia 7 for the 15-yard score. The Cowboys used almost all of the 10-minute overtime, scoring with 1:55 remaining.

"I knew I had the slant route there, but I knew he would sit on it," Cooper said. "I tried to sell the fade. It didn't really work, but I just stayed with the ball and there you have it."

By winning the third overtime game in the past four seasons at A&T Stadium between these division rivals, the Cowboys (8-5) won their fifth straight game and took a two-game lead over the defending Super Bowl champion Eagles (6-7) and Washington with three games left.

Carson Wentz threw for three touchdowns, including a pair of tying scores in the fourth quarter. But he never got a chance in overtime because Prescott engineered a 13-play, 75-yard drive.

"Helpless feeling," Wentz said. "I've got a lot of lot of confidence in the defense. They were making plays today. We just didn't do enough early offensively and that cost us."

The Cowboys dominated almost from the start, but let the Eagles stay close to set up a wild fourth quarter. Dallas, which can clinch the NFC East title with a win at Indianapolis next Sunday, finished with 576 yards, the most since gaining 578 against the St. Louis Cardinals in 1973.

Cooper finished with a career-high 217 yards receiving on 10 catches in his second game in the past three with at least 180 yards and two scores. All three of Cooper's touchdowns - the others from 75 and 28 yards - were in the fourth quarter and overtime.

Acquired from Oakland for a 2019 first-round draft pick seven games into the season, Cooper leads the NFL with 642 yards receiving since Week 9, his first game with the Cowboys. He had nine catches for 190 yards after halftime.

The Cowboys went for it on fourth-and-1 from the Eagles 19 in overtime and got it with a 1-yard plunge from Ezekiel Elliott, who had 192 yards from scrimmage on 40 touches - 28 carries for 113 yards and 12 catches for 79.

Cooper converted a pair of third downs on the winning drive. The first one was big, too - a 12-yarder on third-and-9 from the Philadelphia 40.

"I was almost I guess I would say astonished that we were able to get that trade," said Prescott, whose has seen a significant jump in completion percentage, yards per game and passer rating in six games with Cooper.

"So I guess if you say that, when we're getting a trade, well, what's wrong? And then to get him and see everything turning out and playing out the way it is, we're very, very fortunate."

Brett Maher set a Dallas franchise record with a 62-yard field goal on the final play of the first half and had three field goals.

The game went from a defensive struggle with missed Dallas opportunities that kept the Eagles close to a wild fourth-quarter shootout.

Wentz thought he had answered the 75-yard touchdown to Cooper with 3:01 remaining with a matching 75-yarder to tight end Dallas Goedert.

But Goedert was called for pass interference, apparently for pushing off against Jeff Heath before bouncing off a helmet-to-helmet hit from Xavier Woods that wasn't called and running to the end zone from midfield.

Philadelphia scored anyway, with Wentz leading a more methodical march to his third touchdown pass, a 6-yarder to Darren Sproles for a 23-23 tie with 1:39 to go in regulation.

Douglas had the first interception of Prescott in the first half, but couldn't get a second hand on the ball for the depleted Philadelphia secondary against Cooper with the game on the line.

"I played it perfectly," he said. "I couldn't get the other hand in there to get the pick. I tried to bat it down."

Two years ago, the Cowboys won by the same score with a touchdown on the first possession of overtime. Prescott was on his way to NFL Offensive Rookie of the Year honors, and Elliott went on to win the league rushing title as a rookie. The 12-play, 75-yard drive took 7:12 and was capped by Prescott's 5-yard TD to now-retired tight end Jason Witten.

"Give them credit for fighting and scratching and clawing and doing the things necessary to stay in the ballgame," Cowboys coach Jason Garrett said.

Cowboys RG Zack Martin left in the second half with a knee injury. The four-time Pro Bowler has been battling a knee issue all season. ... Philadelphia RB Corey Clement injured his right knee when he was stopped for a 4-yard loss late in the first quarter and didn't return. ... Eagles defensive end Josh Sweat left in the first half with an ankle injury and didn't return.

Eagles: At LA Rams next Sunday.

Cowboys: At Indianapolis next Sunday.