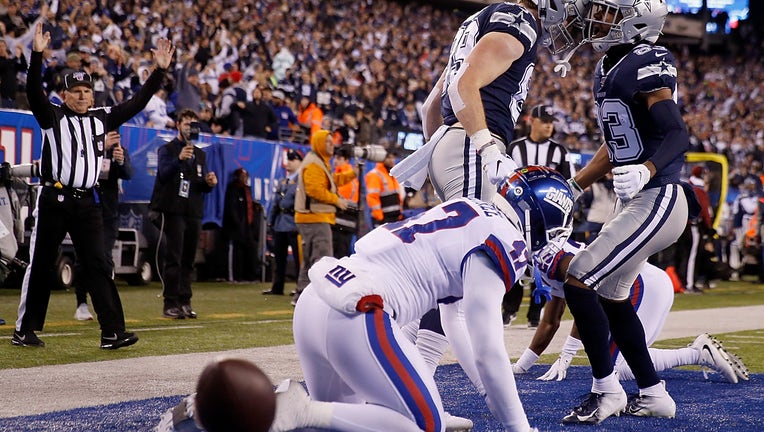 Then the Dallas Cowboys scampered past the New York Giants.

Dak Prescott shook off an interception on his first pass and threw for three touchdowns, and the Cowboys turned three Daniel Jones turnovers into 13 points on their way to a 37-18 win over the Giants in a Monday night game that was briefly delayed in the second quarter by an elusive feline.

"Things weren't good up to that point," Prescott said about the game before the cat appeared. "It could only get better from there. I definitely thought about that. I guess we'll start rolling now that the black cat's come in bad for the Giants. It was fun. First time I've seen an animal run on the field that I've been a part of."

Ezekiel Elliott ran for a season-high 139 yards as Dallas (5-3) beat New York (2-7) for the sixth straight time. DeMarcus Lawrence had one of the Cowboys' five sacks.

Prescott hit Blake Jarwin for a much-needed 42-yard touchdown late in the second quarter. He added a 15-yarder to Michael Gallup and a 45-yarder to Amari Cooper in the fourth.

Brett Maher kicked three field goals, including a 52-yarder in the waning seconds of the first half that gave Dallas the lead for good after falling behind 12-3 in the second quarter. Jourdan Lewis scored on a 63-yard fumble return in the final seconds.

The win gave the Cowboys a half-game lead over Philadelphia (5-4) in the NFC East and improved their record in the division to 4-0, including a win over the Eagles.

"You can'(t lose the turnover battle and expect to win any game," Giants defensive back Michael Thomas said. "We're making young mistakes, If we stop them we'll start playing winning football. It's not just the offense, it's defense and special teams, too. It's two or three plays a game where we hand the other team points."

Jarwin, who has scored five of his six career touchdowns against the Giants, rambled most of the 42 yards on the score to get Dallas within 12-10 with 52 seconds remaining in the half.

Xavier Woods intercepted a third-down pass by Jones on the ensuing series and returned it to the Giants 38, setting up Maher's go-ahead field goal on the final play.

The teams exchanged field goals in the third quarter, with a Jones fumble forced by Woods setting up Dallas. Rosas answered for New York.

The chippy fourth quarter belonged to Dallas and Prescott, who finished 22 of 35 for 257 yards. He has thrown for 12 TDs against New York in the last four games.

Jones finished 26 of 41 for 210 yards, including a 65-yard play by Saquon Barkley, his longest reception.

"I just thought we started to play the way we wanted to play," Cowboys coach Jason Garrett said of his team's slow start coming off a bye week. "I do think we dominated them up front. Zeke ran the ball really well. That's certainly a part of us playing our best offensive football."

Before the game was suspended by the cat, the Giants were winning 9-3 and Prescott had 84 yards and an interception by Antoine Bethea on the opening play from scrimmage. After El Gato appeared, Dallas outscored New York 34-9 and Prescott had 173 yards, three TDs and no interceptions.

Cowboys: Safety Jeff Heath left early in second half with a leg injury.

Giants: Home to play an away game against the Jets on Sunday.