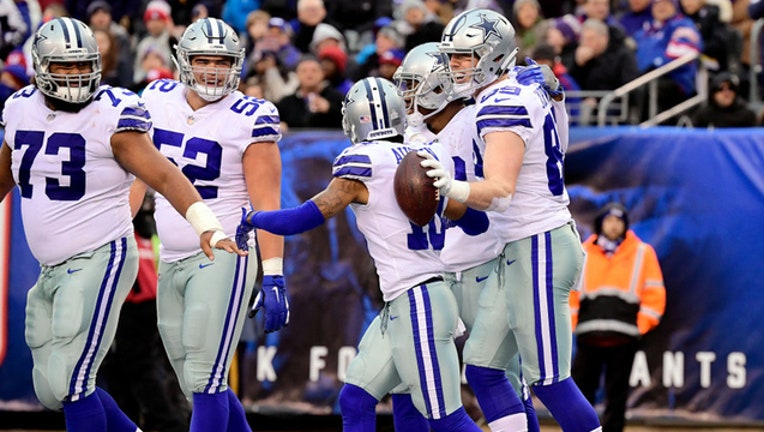 Blake Jarwin #89 of the Dallas Cowboys is congratulated by his teammates after his third quarter touchdown against the New York Giants at MetLife Stadium on December 30, 2018 in East Rutherford, New Jersey. (Photo by Steven Ryan/Getty Images)

They played it to the end and got momentum for the playoffs, in which they will host Seattle next weekend.

Prescott threw a 32-yard fourth-down touchdown pass to Cole Beasley on a play that was reversed by video replay and added a winning 2-point conversion pass to Michael Gallup with 1:12 to play as the NFC East champion Cowboys rallied twice in the final 10 minutes to beat the New York Giants 36-35 on Sunday.

"You saw it out there, the intensity that we played with, the ups and the downs and how we stayed through it," Prescott said after going 27 of 44 for 387 yards and a season-high four touchdowns, three to tight end Blake Jarwin. "We stayed positive, knowing we were going to give ourselves a chance to come out on the end. It was a great win."

The win was the seventh in eight games for the Cowboys and it has them looking forward to next weekend's wild-card game at home.

"That might be for people outside our building, talking about the meaningful or meaningless nature of a game," Garrett said. "They're all very meaningful to us. It's opportunity for us to improve as a football team, to finish strong, to have some momentum going into the playoffs."

For the Giants (5-11), it was another late loss. They lost eight games by seven points or less in Pat Shurmur's first season, the last two by a total of two points.

This also could have been quarterback Eli Manning's final start for them after a 15-year career. He has a year left on a four-year contract but his salary will count $23 million against the cap next season.

The soon-to-be 38 year old who is not very mobile still loves to play, but New York has made the playoffs once since winning the Super Bowl in February 2012.

"The losses hurt and they are tough to deal with," said Manning who went 24 of 41 for 301 yards and two touchdowns. "They are tougher now than in the past because you know your opportunities are running low to make playoffs and championship runs. When you are not doing as well as you want to, it is tough to handle."

Saquon Barkley capped a record-setting rookie season with a sensational 2-yard touchdown dive with 3:21 to play to put the Giants ahead 35-28

However, Prescott engineered a nine-play, 70-yard drive that he ended with an arching pass to Beasley in the back of the end zone. There was no doubt he caught the ball, and a review showed he got his knee down in bounds.

"That was as good a play as I've ever seen him (Prescott) make, and Beas made a big-time catch at the end of it," Garrett said, adding it made no sense to go to overtime with a playoff game next week.

Barkley finished with 109 yards rushing and 142 yards from scrimmage. He ended the season with 91 catches, breaking Reggie Bush's NFL record (88) for most receptions by a rookie running back. The No. 2 overall pick also finished with 2,028 yards from scrimmage, joining Hall of Famer Eric Dickerson (2,212 yards in 1983) and Edgerrin James (2,139 in 1999) as the only rookies with at least 2,000 scrimmage yards in NFL history.

Cowboys: G Xavier Su'-a-Filo started with Zack Martin out and was hurt in the third quarter. WR Tavon Austin, who has been sidelined since Week 6 with a groin injury, returned to action. LB Leighton Vander Esch left the field with a lower-leg injury. He said it was minor.

Cowboys: A wild-card game at home next weekend against Seattle. The Seahawks beat Dallas in Seattle in Week 3.

Giants: Go home and get ready for next season, with questions about Manning remaining their quarterback.