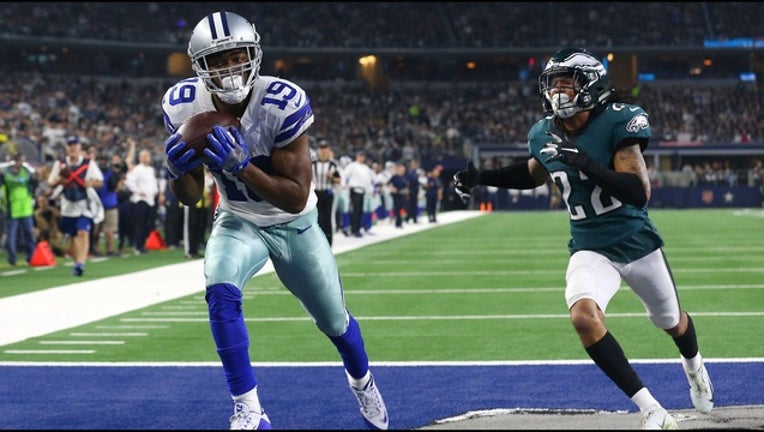 ARLINGTON, TEXAS - DECEMBER 09: Amari Cooper #19 of the Dallas Cowboys makes a touchdown reception against Sidney Jones #22 of the Philadelphia Eagles at AT&T Stadium on December 09, 2018 in Arlington, Texas. (Photo by Richard Rodriguez/Getty Ima

ARLINGTON, Texas (AP) - Jerry Jones is getting praised for a football move.

There might not be a better way to explain the impact of the oft-criticized owner and general manager's bold trade for Dallas, sending a 2019 first-round pick to Oakland for receiver Amari Cooper with the Cowboys fading fast in the NFC East race.

Cooper leads the NFL in yards receiving since joining the Cowboys, who have won five straight games to get to the brink of the division title and a home wild-card game.

With Cooper, Dak Prescott looks more like the 2016 NFL Offensive Rookie of the Year rather than a struggling quarterback. And Jones' name is coming up in broadcast booths, and as an off-the-wall choice for performer of the week in the NFL.

In other words, the primary object of ire for fans fed up with nearly a quarter-century without a trip to the Super Bowl, or even an NFC championship game, is being viewed as someone who saved Dallas' season.

"I think a big part of doing things with the desire to excel is to show them," Jones said after Cooper scored three touchdowns, including the winner in overtime of a 29-23 victory against Philadelphia that gave the Cowboys a two-game division lead with three to go. Dallas has the tiebreaker by virtue of a season sweep of the defending Super Bowl champs.

"I think that's a major motivation factor - to show them. I think the way sports and football, it just gives you a chance when people say, 'I don't like that move, that's not smart.' I like this stuff. As a matter of fact, I make my worst grades when I'm being praised."

There were plenty of second-guessers when Jones made the move at 3-5, with conventional wisdom saying the Cowboys had problems beyond a missing playmaker at receiver in the first season without franchise TD catch leader Dez Bryant, dumped in a cost-cutting move.

Prescott was on that list of issues, mired in a 25-game stretch of mediocrity and numbers sharply lower than those from his sensational rookie season, when Dallas set a franchise record with an 11-game winning streak and had an NFC-best 13 victories.

And while Prescott had two interceptions and a lost fumble to help the Eagles stay in a game the Cowboys were dominating, the display he put on with Cooper in the last half of the fourth quarter and overtime was remarkable.

Touchdown throws of 28 and 75 yards in the fourth quarter were followed by a 15-yarder on the first possession of overtime , with Cooper grabbing a pass tipped by Philadelphia's Rasul Douglas and cruising in from the 7.

"I knew he was good," Prescott said. "I knew he was going to get separation and get open and make great catches. But when you just see the run after catch and breaking tackles, and being that great of a player, I'm just thankful we got that trade."

Star running back Ezekiel Elliott is a beneficiary of Cooper's presence as well. The running lanes have been wider, and check-downs against defenses preoccupied with the former Alabama standout have been more frequent. Elliott had a career-high 12 catches against the Eagles.

"I didn't know we were going to get all that, honestly,'" said Elliott, who retook the NFL rushing lead with 1,262 yards. "But when I finally saw him in person, when I saw him catch the ball, I saw him run around and run after the catch, that's when I really realized he's truly special."

The Cooper acquisition is bringing back good - and bad - memories for Jones.

The good? An offseason trade for now-Hall of Fame defensive end Charles Haley in 1992, before Dallas became the first team to win three Super Bowls in four years. And the free-agent signing of Deion Sanders in 1995, before the last of those titles.

The bad? A pair of trades for receivers during the current Super Bowl drought. Joey Galloway was particularly costly because Jones gave up two first-round picks for not much in return. Roy Williams was a midseason trade similar to Cooper a decade ago.

It took Williams 21 games to get what Cooper has in six - an NFL-best 696 yards since Week 9. Cooper has six touchdowns. The other Dallas receivers have seven combined.

"He is making big plays," Jones said. "He is altering the defense. There is no question about it. He makes everybody better on both sides of the ball. But you got to make the big plays. You can see he is a difference-maker."

Jones has the pats on the back to prove it.

NOTES: Coach Jason Garrett said RG Zack Martin re-injured his left knee against the Eagles, just as he did in the teams' first meeting. Martin has been hobbled since spraining the medial collateral ligament in the knee in the preseason. The Cowboys are hopeful he won't miss a game for the first time in his five-year career. ... Garrett said LB Sean Lee and WR/KR Tavon Austin should return to practice as limited participants this week. Lee has missed all five games on the winning streak with a hamstring injury. Austin hasn't played since Week 6 because of a strained groin.