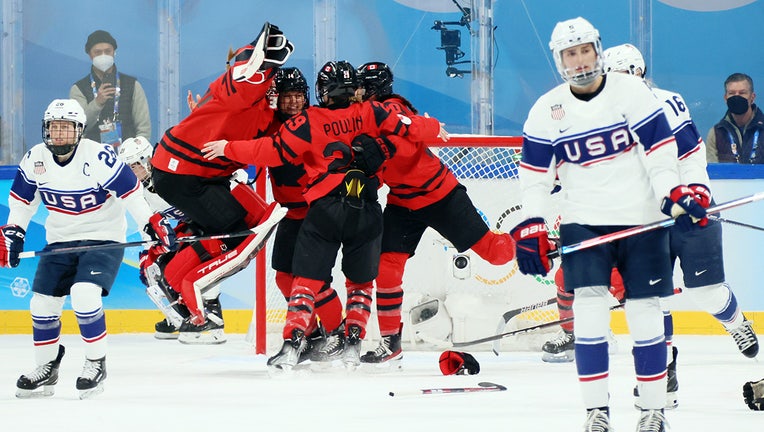 BEIJING - Marie-Philip Poulin reminded everyone of her Captain Clutch reputation. And Canada regained its place atop the women’s hockey world.

It was only fitting that Poulin delivered at a time her team needed it most by scoring twice, including her third Olympic gold-medal clinching goal, in Canada’s 3-2 win over the defending champion United States at the Beijing Games on Thursday.

After winning gold in her first two Olympics, Poulin learned to appreciate how significant capturing her third was, coming four years after losing it to the Americans at the Pyeongchang Games.

"I just got shivers," she said.

"That 2018 was very hard, very, very hard. And I think when you take some time to reflect on what you need to do better as a team and personally," Poulin added. "We did that and I’m very happy that we’re resilient and we’re able to put that back in the past and win that gold today."

Ann-Renee Desbiens stopped 38 shots and Sarah Nurse had a goal and assist in a game where the Canadians built a 3-0 lead and hung on for the win. Nurse set the single Olympic tournament record with 18 points.

The Canadians finished 7-0 by showcasing a dynamic, deep and relentless offensive attack to capture their fifth Olympic title in seven tournaments, with four coming against the Americans in what has been one of sports’ fiercest and longest-running rivalries.

Canada can now boast holding both the Olympic and world championship titles at the same time, and for the first time since 2012. The win at Beijing comes nearly six months after Poulin’s overtime goal sealed Canada’s 3-2 victory over the U.S. at worlds, which ended the Americans’ run of winning five consecutive tournament titles.

"It was a long haul of silvers and a lot of soul-searching in the program," said Brianne Jenner, named the tournament MVP for tying a single Olympic record with nine goals. "I think this group didn’t really shy away from it. We were like, ‘Let’s be bold, let’s be brave, let’s go out and see what we can do.'"

RELATED: US men’s hockey team out of Winter Olympics after shootout loss to Slovakia

Hilary Knight, the Americans’ only consistent threat in the tournament, scored her team-leading sixth goal on a shorthanded rush to cut the deficit to 3-1. Amanda Kessel scored with 13 seconds remaining during a mad scramble in front for a power-play goal and with the U.S. net empty for an extra attacker.

"We can’t get down that many goals. It’s really tough to bounce back," Knight said. "It’s devastating. It’s heartbreaking. ... It feels like we let our country down."

The Americans, who have two Olympic golds, settled for their fourth silver medal, with all losses coming against Canada.

Poulin gained her nickname by scoring decisive goals in big games and especially against the Americans. She scored both goals in Canada’s 2-0 gold-medal win over the U.S. at the 2010 Vancouver Games. Four years later at Sochi, Poulin scored in overtime to seal the gold versus the Americans again.

On Thursday, Poulin staked the Canadians to a 2-0 lead with 4:34 left in the first period, and then made it 3-0 off an odd-man rush 9:08 into the second period. Nurse drove up the right wing and fed Jenner, whose slapper was stopped by Cavallini. The rebound caromed to Poulin, who immediately fired a shot from the left of the net and banked it in off Cavallini’s skate.

"Woo, I don’t know. I don’t know what’s happening," Poulin said of her knack for clutch goals. "There’s some angel there or something."

And yet, Poulin had her anxious moments before she could celebrate. She was in the penalty box for tripping when Kessel scored in the closing seconds — but only after Desbiens stopped the first five shots she faced during the power play.

Fitting for Poulin was standing next to Desbiens in the medal line and having the honor of draping the gold around the goalie's neck.

"She showed up in those big moments," Poulin said of Desbiens, who quit hockey after 2018 before being coaxed into rejoining the team. "She kept us in the game and to be honest, being able to give (the medal) to her, it was very special."

No problem, Desbiens said, noting she had an inkling the game was over while glancing at the clock and seeing only 13 seconds left after Kessel scored.

Though Knight's goal provided the Americans life, they were unable to cash in on their chances in the third period. Alex Carpenter had two chances five minutes in, only to have her one-timer from the left circle hit the crossbar, and then getting stopped by Desbiens on a partial breakaway.

Kessel lamented how her goal came far too late.

"We hold ourselves to a high standard, and personally myself, I think my line we wanted to score more goals," she said. "We knew that we were counted on to probably score earlier and get one or two for our team."

The U.S. didn’t have enough defense to contain the Canadians’ aggressive forechecking attack, nor the offense to match them, especially without top center Brianna Decker, who broke her left leg in the tournament opener.

The Americans finished seventh out of 10 teams in scoring efficiency with just 30 goals on a tournament-leading 374 shots.

It’s been a long and bumpy road back for the Canadians, who were forced to reinvent themselves in three years under coach Troy Ryan. The low point followed Canada settling for bronze at the 2019 world championships, which marked the first time in tournament history the country failed to reach the title game.

At Beijing, the Canadians out-classed the field by outscoring opponents by a combined margin of 57-10, including a 4-2 win over the U.S. in group play last week.

"Just being able to prove ourselves again and being able to fight adversity and come back on top," Rebecca Johnston said. "It’s great to know that this team has gone through a lot and we’re able to pull out a win."