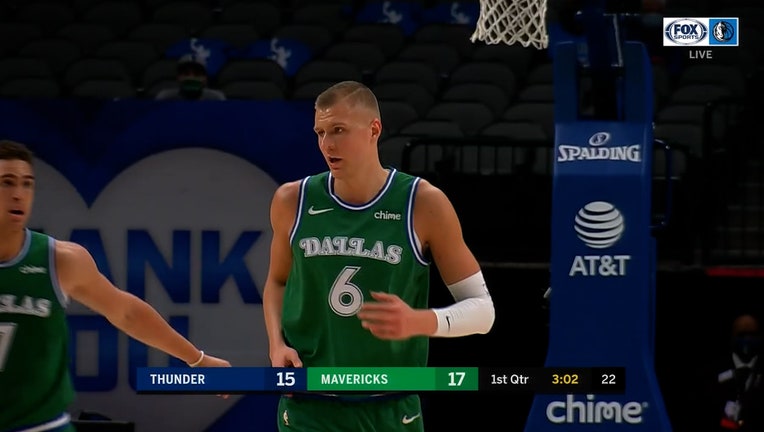 DALLAS - Kristaps Porzingis had 19 points and 13 rebounds with European sidekick Luka Doncic sidelined by a back issue going into his second All-Star appearance, and the Dallas Mavericks beat the Oklahoma City Thunder 87-78 on Wednesday night.

Tim Hardaway Jr. scored 19 points, Josh Richardson added 16 and Dallas cruised most of the second half without the NBA's sixth-leading scorer. Doncic had averaged 31.6 points in the previous nine games, with Dallas winning seven to get above .500 for the first time since Jan. 22.

The Mavericks kept that roll going, winning for the 10th time in 13 games going into the All-Star break. Dallas lost six in a row before that.

Coach Rick Carlisle said he expected Doncic, who was in a white Air Jordan hoodie in his usual spot in one corner of the spaced-out bench, to play in Atlanta on Sunday. The Slovenian sensation was voted a starter for the second straight year.

"I didn't want to force anything," Porzingis said after this third game since returning from his own back problem. "I knew the ball was going to come back to me. At the end, some easy shots, easy ones came to me. For us, it's important that we're moving the ball."

Shai Gilgeous-Alexander scored 15 points for Oklahoma City, which was held to a season low in points on its worst shooting night so far at 33%. The previous lows were 80 points and 37%.

"I think the thing we can take away from this game is we've just got to keep playing," said Kenrich Williams, who scored all eight of his points in the first half playing not far from his college home at TCU. "They're going to hit tough shots and offensively the ball's not always going to go in. You've just got to stay together defensively."

For the first 2 1/2 quarters, the Mavericks also missed Doncic's 46.1% shooting from 3-point range during those nine games before he finally had to sit with a back issue that's been bothering him for a couple of weeks.

Dallas had missed 22 of its first 23 from long range when Hardaway hit one for Dallas' first 10-point lead at 62-52 in the third quarter. At that point, Hardaway was 2 of 5 from beyond the arc while his teammates had missed all 18 attempts.

That second basket from long range by Hardaway got other Dallas players going, though.

Trey Burke, Porzingis and Richardson hit three in a row in the third quarter, and Porzingis drained a pair on back-to-back possessions for Dallas' first 20-point lead at 84-64 in the fourth quarter. The Mavericks ended up at 20% from beyond the arc (8 of 40).

"I liked the looks," Carlisle said. "Some nights you’ve just to keep firing them up there. We’ve been shooting the 3 well, particularly the last three, three and a half weeks. I just liked the way we stuck to the process in the second half.

Thunder: Despite the low-scoring night, Oklahoma City had five players in double figures. The others were Ty Jerome with 13, Darius Bazley and Theo Maledon with 11 apiece and Al Horford with 10. ... Bazley also had 10 rebounds. ... Isaiah Roby, who ended up with the Mavericks as a second-round pick in 2019, had five points and eight rebounds in his first game against his former team. He was traded before the coronavirus shutdown last season.

Mavericks: C Willie Cauley-Stein was active after spraining his right thumb in the previous game against Orlando, but didn't play. ... Jalen Brunson was the other double-figure scorer with 11 while Trey Burke had nine points and a team-high six assists without Doncic, who is fifth in the NBA in assists per game.

The first meeting between these teams this season ended a run of four consecutive games in Oklahoma City. The final two games of 2018-19 were at the home of the Thunder, as were the first two of last season before the coronavirus shutdown. Dallas and Oklahoma City split those four games.

Thunder: A two-game trip to Texas going into the All-Star break wraps up in San Antonio on the second night of a back-to-back Thursday. It's the third meeting of the first half between the teams. They split the first two in Oklahoma City.

Mavericks: Dallas returns from the break at home against the Spurs on March 10. The Mavericks have won four of the past five regular-season meetings with their biggest rival after San Antonio won 15 of the previous 17.