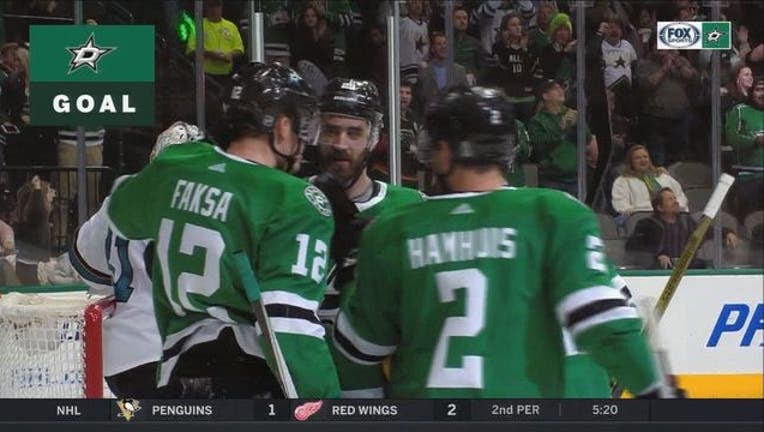 DALLAS (AP) - Ben Bishop made 26 saves in his fourth shutout of the season, Tyler Pitlick scored twice and the Dallas Stars beat the San Jose Sharks 6-0 on Sunday night.

Dallas scored two goals in each period - by John Klingberg and Pitlick in the first, Stephen Johns and Tyler Seguin in the second and Devin Shore and Pitlick 50 seconds apart in the third.

San Jose starter Martin Jones had 18 saves in the first two periods before giving way to Aaron Dell. The Sharks' three-game winning streak ended with their most lopsided loss this season.

The Stars had the game's first six shots on goal and cashed in on their seventh. Janmark circled behind the net and passed to Klingberg near the right faceoff dot. He sent a shot past Jones at 6:19, and then Pitlick gave Dallas a 2-0 lead at 15:07.

The Stars had 17 shots, their most in the first period this season, to 5 for San Jose.

The teams were skating 4-on-4 when Johns scored at 4:25 of the second. It was Dallas' first shot on goal in the period, after the Sharks had the first six. Included was a power play during which Logan Couture hit the right goalpost and had another shot stopped by Bishop's pads.

Seguin skated in front to deflect Klingberg's shot into the top of the net on the power play. The Stars led 4-0 at 9:33 of the second.

NOTES: Dallas RW Alexander Radulov left in the second period with an upper-body injury from a hit by Sharks D Justin Braun. ... The Stars have scored a power-play goal in six straight games, following a stretch of 14 games with only two goals with a man advantage. ... Benn has seven points (three goals, four assists) during a six-game point streak. ... Couture, who leads San Jose with 15 goals, returned after missing four games because of a concussion. ... The Sharks had not allowed more than five goals in a game before Sunday. ... The six-goal win was Dallas' largest margin of victory.

Sharks: Play the second game on a five-game trip on Tuesday night at Montreal. Thirteen of their next 17 games will be on the road.

Stars: Face Columbus on Tuesday night in the third game of a six-game homestand.