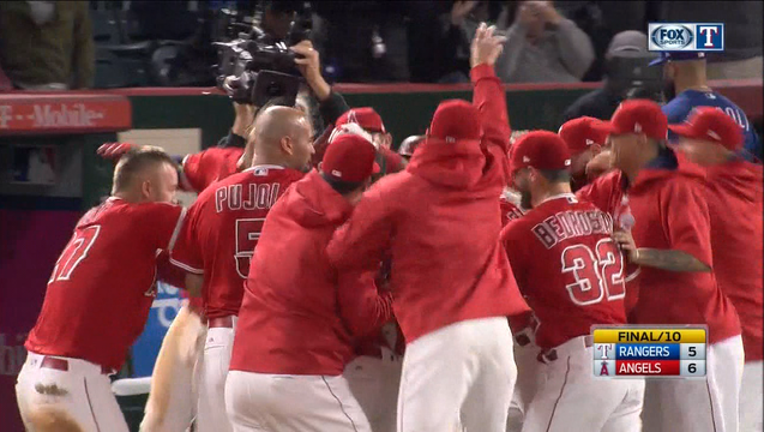 ANAHEIM, Calif. (AP) - The Los Angeles Angels are getting into a habit they hope never ends.

Eight games into the season the Angels appear to have mastered the art of the comeback, rallying again Tuesday night with three runs in the ninth to tie the Texas Rangers before winning it 6-5 in the 10th on catcher Carlos Perez's squeeze bunt.

In their previous game Sunday, the Angels rallied to defeat the Seattle Mariners with seven runs in the bottom of the ninth. They trailed 5-0 after six innings Tuesday.

"We kept getting closer and a little bit closer and you're thinking, 'We're going to do it again,' " Angels outfielder Cameron Maybin said.

Maybin led off the 10th with a walk and went to third on Danny Espinoza's one-out single. Perez then bunted the first pitch from Texas reliever Jeremy Jeffress (0-1) up the first-base line.

The ball hugged the inside grass and first baseman Mike Napoli had no choice but to let it roll and hope it would drift outside. It died on the edge of the grass as Maybin scored.

"I'm really confident I can get a bunt down," Perez said. "Just trying not to be too perfect."

The Rangers took a 5-2 lead into the ninth and summoned right-hander Sam Dyson. But the closer ran into immediate trouble when Espinosa led off with a home run.

Yunel Escobar and Mike Trout both doubled for another run, and with two outs, Albert Pujols lined a single to left to score Trout with the tying run.

Jonathan Lucroy hit a three-run homer and Elvis Andrus a solo shot off Angels starter Tyler Skaggs in the third to build the 5-0 Texas lead.

"We have to continue to grind out games and find a way to get that third out," Banister said.

Rangers: Third baseman Adrian Beltre had a setback from his right calf strain running Saturday. The Rangers said a new MRI taken Monday showed a mild Grade 1 strain and in a different area than his original injury. They said he would undergo a more conservative rehab program and offered no timetable to his return. He originally injured the calf March 27 and has yet to make his 2017 debut.

Angels: Infielder Luis Valbuena remains out with his strained right hamstring but is taking infield and batting practice. Manager Mike Scioscia said next will be for him to begin a running program to build up leg strength.

Dyson has now blown his only two save opportunities, has an unsightly 33.00 ERA and Bannister sounds like he could be open to changing his closer. Said Banister: "We can't continue to lose ballgames in this manner. We'll look at all our opportunities and see where we can go."

Trout started off 0-2 against Dyson before lining his ninth-inning double to score Escobar, but his biggest play may have come on the defensive side in the 10th. Napoli crushed a pitch that seemed to be slowed by the heavy night air. Trout leapt and caught it at the top of the wall. Said Trout: "I thought it was gone off the bat. I couldn't tell (if it was out). I was just happy I caught it."

Rangers: Right-hander A.J. Griffin will attempt to rebound from a rough first start (4 earned runs on four hits in 3 1/3 innings vs. the A's) against the Angels on Wednesday. He is 3-2 with 4.23 ERA in eight lifetime starts vs. the Angels.

Angels: Right-hander Jesse Chavez (1-0) will try to build on his winning start with the Angels on Wednesday against the Rangers. In his debut for the Angels on Friday he held the Mariners to one run on four hits in 5 2/3 innings.