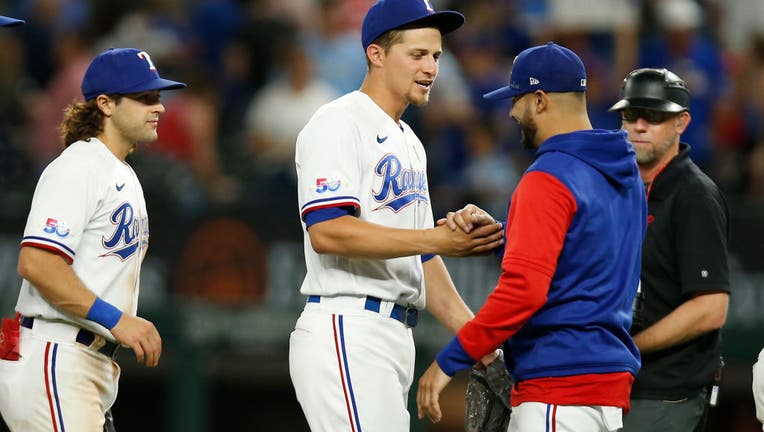 ARLINGTON, Texas - Martín Pérez made up his mind pretty quickly that he wasn't coming out of the game after taking a 97 mph liner off his right shin.

The Texas left-hander didn't want to interrupt the best stretch of his career.

Pérez retired all 16 batters after shaking off the shot to his shin, lowering his majors-leading ERA with seven scoreless innings in the Rangers' 3-0 victory over the Tampa Bay Rays on Tuesday night.

"That ball put me on a different level with these guys, and I said, ‘I’ve got to do this,’" Perez said. "It’s my time. It’s time to show up and do it for the guys."

Pérez needed a few minutes to recover after Taylor Walls' scorching infield single in the second. He stayed in, got Vidal Bruján to fly out on the next pitch with two runners on and pitched five perfect innings from there.

John King pitched a perfect eighth inning, and Joe Barlow did the same in the ninth for his ninth save as the Rangers retired the final 22 batters.

The 31-year-old Pérez is in his second stint with the team that signed him as a teenager out of Venezuela. He extended the longest active streak in the majors without allowing a homer to 66 1/3 innings.

Garrett Richards got up in the Texas bullpen after Pérez was struck, and Pérez went down the tunnel at the end of the inning. He told the training staff he was fine. Manager Chris Woodward had already gotten that drift.

With his eighth consecutive start allowing no more than one earned run, Pérez dropped his ERA to 1.42. He has allowed a total of four earned runs over 55 1/3 innings since giving up three in each of his first two starts, both of his losses.

"He just knows how to read swings and read how people are doing," Seager said. "His control has just been impressive. I don't how you explain it. It's really fun to be behind and really fun to watch."

Randy Arozarena, Yandy Díaz and Mike Zunino went deep in that game last July in Florida. Those three managed just a single from Díaz in eight at-bats against Pérez, and Zunino had two of his three strikeouts.

"He had a lot of late life, a lot of late action in the zone," Rays manager Kevin Cash said. "Add the fact that he was pitching to the edges it felt like all night with every batter, you're going to have a quiet offensive night."

Ryan Yarbrough (0-2) gave up six hits and three runs in 6 2/3 innings. He hit Josh Smith with a pitch twice a day after Smith had three hits in his major league debut.

The Rangers had their winning first winning month since June 2019, finishing May at 17-10. Pérez finished the month with a 0.64 ERA, the best in any month for any American League pitcher with at least 40 innings thrown since Minnesota's Johan Santana finished at 0.45 in September 2004. It was the second-best ERA in any month for a Texas pitcher (Yovani Gallardo, 0.54, June 2015).

Rays: SS Wander Franco was placed on the 10-day injured list with a right quadriceps strain. Franco aggravated the injury running the bases in the ninth inning of Monday’s 9-5 loss in the series opener. The right quad has been bothering the 21-year-old Franco for a couple of weeks. He's now sidelined along with second baseman Brandon Lowe, who has lower back tightness.

Rangers: Former closer José Leclerc, who hasn't pitched in the majors since the first week of the shortened 2020 season in July of that year because of shoulder and elbow surgeries, is moving to Triple-A Round Rock to continue a rehab assignment. The right-hander is eligible to come off the 60-day IL on Monday.

Rays: LHP Jeffrey Springs (2-2, 1.62 ERA), who made his big league debut with the Rangers in 2018 and made 43 appearances for them over his first two seasons, is coming off the longest outing of his career. Springs pitched six innings in a 2-0 loss to the Yankees, allowing both runs on solo homers

Rangers: Opening day starter Jon Gray (1-2, 5.56) is set for his eighth start in his first season with Texas. Tampa Bay is one of six teams the right-hander has never faced. His only win came in his only other start at home, 7-4 over the Los Angeles Angels on May 16 when he gave up four runs in 5 2/3 innings.