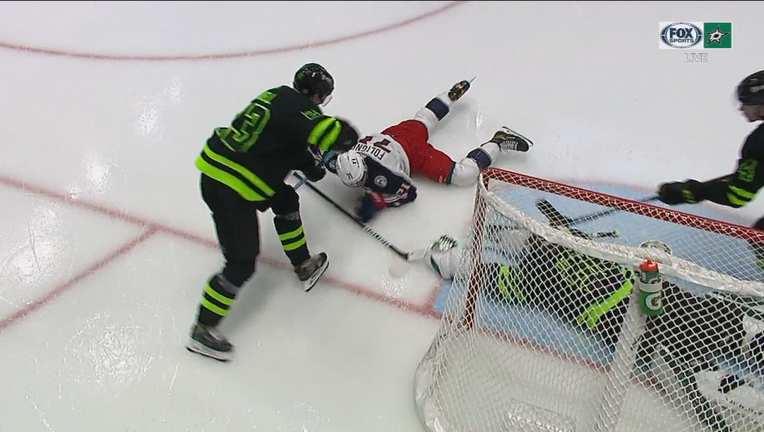 DALLAS - Joe Pavelski scored his NHL-leading ninth power-play goal and the Dallas Stars tallied twice in the opening period for the first time this season, beating the Columbus Blue Jackets 5-0 on Saturday night for only their second win in the past 12 games.

"We were going to take a win however we could get it right now," Pavelski said.

"In my mind it’s no question that should be called back. I factor in the tape. I look at the call. I look at the video," Tortorella said. "If you’re going to tell me that pad wasn’t shoved in, and what was told to me was that it was a play on the puck, and that’s why it’s a good goal, I just do not even comprehend that. The puck is there but the pad is shoved in and the puck goes in behind it."

Dallas (7-8-4) dropped its previous four games. Before getting two goals in the third period of a 3-2 loss to Columbus on Thursday, the Stars had gone scoreless for 189 minutes, 46 seconds. They had won only one other time since a 6-3 victory at Columbus on Feb. 2.

That span of 9 1/2 periods without a goal included consecutive shutout losses to Tampa Bay in the first two meetings this season against the team the Stars lost to in the Stanley Cup Final last September.

"Every game is the same, we do want to get off to a great start," Stars coach coach Rick Bowness said. "But tonight ... we tried to build off our third period from the last game, and we were able to do that."

The Blue Jackets (10-11-5) missed a chance for their first three-game winning streak this year.

Korpisalo stopped 18 shots before getting pulled midway through the third period after Roope Hintz scored with some nifty skating and a backhand to make it 4-0. Radek Faksa added a short-handed goal in the final minute against Veini Vehvilainen.

Hintz was the only player with multiple points, as he had the primary assist on the early power-play goal.

Stars defenseman Miro Heiskanen scored for the second game in a row after coming up empty in his first 17. He gathered a puck that ricocheted off the side boards in the second period and snapped a wrist shot from about 37 feet for a 3-0 lead.

At 22 years and 78 days, Oettinger became the youngest goaltender in Dallas Stars history to record a shutout, and the second-youngest in Stars/Minnesota North Stars history. Pete Lopresti had two shutouts in 1975 before his 22nd birthday.

"It’s really special," Oettinger said. "My brother and my sister are here tonight, so I was really happy that they were here and able to see that live."

Pavelski said Oettinger is "just solid" and has looked confident since the start of the season.

HOT UNDER THE COLLAR

Things got chippy between the teams as the game progressed, with players scuffling through several stoppages in play. There were no penalties for such discretions until Stars captain Jamie Benn and Columbus center Max Domi both got 10-minute misconduct penalties midway through the third period.

Hintz is dealing with a lingering lower-body issue, and played for only the third time in six games. Even after he went through the morning skate, Bowness called Hintz a game-time decision — and said that will likely be the case throughout the season. Hintz didn't play Thursday after going through the morning skate. In the second period Saturday, Hintz went hard into the boards after a tripping penalty against Gabriel Carlsson.

"When he went down, I winced. That hurt," Bowness said. "He’s such an important part of our team. When he goes down, I hold my breath and hope he gets up."

Columbus plays four home games in a row, with the first of two against Florida on Tuesday night before hosting the Stars twice next weekend.

Dallas is home Sunday night to play Nashville, making up the first of two home games against the Predators that were postponed because of extreme winter weather and widespread power issues in North Texas last month.