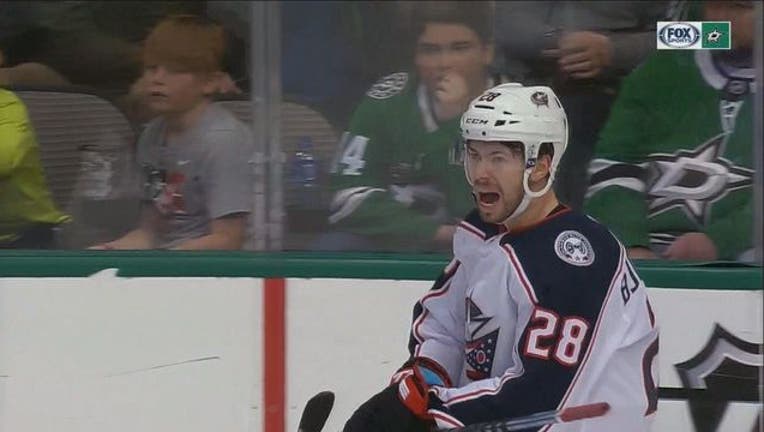 COLUMBUS, Ohio (AP) - Artemi Panarin scored in the second round of a shootout, and the Columbus Blue Jackets beat the Dallas Stars 2-1 on Thursday night.

Joonas Korpisalo had 35 saves for Columbus (26-18-3), which returned from its five-day break after losing both ends of a back-to-back last week. Jordan Schroeder scored his first goal of the season in the first period.

Korpisalo got the start ahead of Vezina Trophy-winner Sergei Bobrovsky, who struggled in the recent losses. The 23-year-old Finn got his first win in nearly a month in his ninth game this season.

Dan Hamhuis scored for Dallas with 2:15 left in regulation. Bishop had 25 stops, including a terrific glove save on Alexander Wennberg with 30 seconds left in the third.

Schroeder - getting more ice time because of injuries to three top forwards - put the Blue Jackets in front 12:23 into the game. Bishop skated behind the cage to retrieve the puck, but he wasn't set when Tyler Motte deflected it back out front to Schroeder, who was racing through the slot.

Dallas' Antoine Russell tapped a shot into the net early in the third period, but it was waved off because a replay showed Radulov had interfered with Korpisalo.

NOTES: Dallas D Dillon Heatherington made his NHL debut. ... Jokinen, claimed off waivers from the Los Angeles Kings on Wednesday, made his debut with the Blue Jackets. At 34, he is the oldest player on the roster. ... F Markus Hannikainen was a scratch for Columbus. ... Dallas scratches included D Julius Honka and F Gemel Smith.

Dallas: At Buffalo on Saturday.

Columbus: At Vegas on Tuesday.