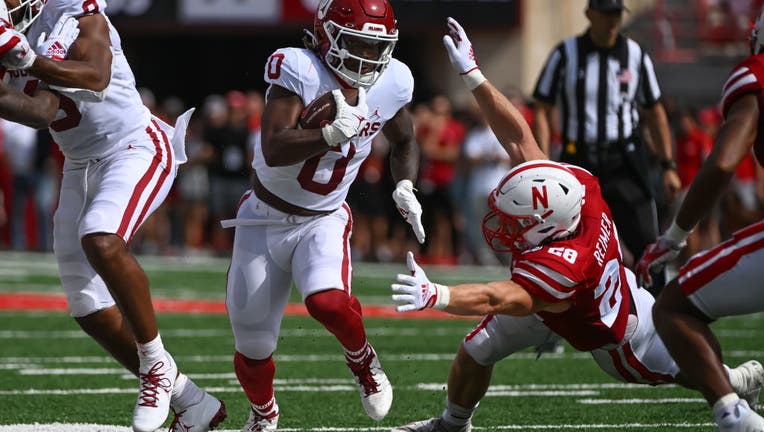 LINCOLN, NE - SEPTEMBER 17: Running back Eric Gray #0 of the Oklahoma Sooners runs through the line against linebacker Luke Reimer #28 of the Nebraska Cornhuskers during the first quarter at Memorial Stadium on September 17, 2022 in Lincoln, Nebraska

LINCOLN, Neb. (AP) - Dillon Gabriel threw for two touchdowns and ran for another, and sixth-ranked Oklahoma hammered Nebraska 49-14 on Saturday in the Cornhuskers' first game following the firing of Scott Frost.

The game was put on the schedule 10 years ago as the back end of a home-and-home series intended to celebrate what once was among college football's greatest rivalries. Instead, it was further confirmation the Cornhuskers are just a shell of the program that decades ago battled the Sooners for conference titles year-in and year-out.

The Huskers have lost 19 straight against Top 25 opponents and nine in a row against Bowl Subdivision teams.

Frost's tenure, which lasted four years plus three games, was marked by close games. The first one under interim head coach Mickey Joseph was never in doubt after the opening quarter, and Memorial Stadium began emptying at halftime.

Oklahoma scored 35 straight points after Nebraska opened the game with a six-play, 77-yard touchdown drive. The Huskers totaled just 71 yards on their next 37 plays in the first half and punted seven times, committed two turnovers and twice turned the ball over on downs before backup quarterback Chubba Purdy ran for a late touchdown.

Gabriel was 16 of 27 for 230 yards and turned things over to backup Davis Beville on the third series of the second half. The Sooners finished with 580 total yards, 312 on the ground.

Gabriel got the Sooners started with a career-long 61-yard touchdown run and then threw a perfect 25-yard pass to Jalil Farooq to put his team ahead.

Marcus Major scored the next two TDs, the first on a short run and the second on a trick play where Gabriel lateraled to tight end Brayden Willis, who lofted a 24-yard pass to the wide-open Major.

Eric Gray's 16-yard run made it 35-7 at half, and then the Sooners went mostly to the run game to chew up clock. OU was the first team to rush for more than 300 yards against Nebraska since Wisconsin in 2019.

The Huskers' Casey Thompson was 14 of 20 for 129 yards and a touchdown and got sacked four times. He was replaced by Purdy after the Huskers went down 49-7 in the middle of the third quarter.

Nebraska and Oklahoma combined for 44 of 48 Big Seven and Big Eight championships from 1948-1995, with many of those impacting the national championship picture.

Nebraska and Oklahoma players from the 1970s and `80s made a weekend of it, the Huskers' 1970-71 national championship teams held a reunion and Johnny Rodgers was honored on the field to commemorate the 50th anniversary of his winning the Heisman Trophy.

Oklahoma: The Sooners didn't have to worry about getting out to a slow start for a second straight week. After scoring seven first-half points against Kent State last week, the Sooners had 35 by half and will go into Big 12 play off their most complete game of the season on both sides of the ball.

Nebraska: The game illustrated how far the Huskers are from being able to compete against a high-quality opponent. The defense continues to flounder, having given up more than 500 yards to a third straight Bowl Subdivision opponent. The offensive line doesn't give Thompson a chance to create a rhythm.