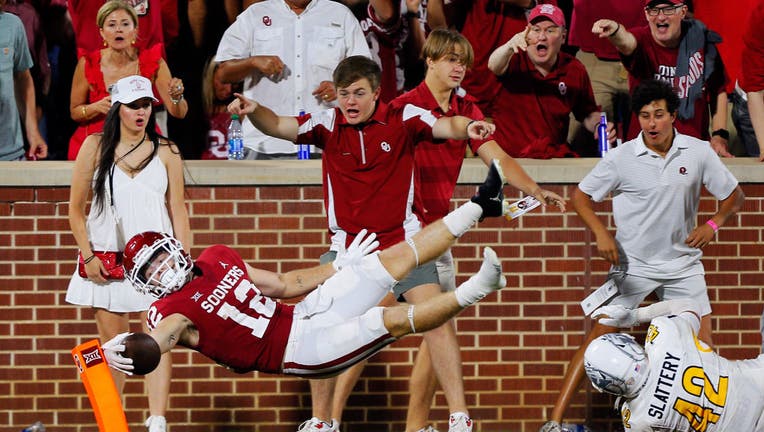 NORMAN, OK - SEPTEMBER 10: Wide receiver Drake Stoops #12 of the Oklahoma Sooners dives for the pyloon to score a touchdown after slipping free of the grasp of linebacker Shane Slattery #42 of the Kent State Golden Flashes in the third quarter at Gay

NORMAN, Okla. (AP) - Marvin Mims caught seven passes for 163 yards and two touchdowns to help No. 7 Oklahoma overcome a slow start in a 33-3 victory over Kent State on Saturday night.

Dillon Gabriel completed 21 of 28 passes for 296 yards and three touchdowns, and the Sooners finished with 430 yards of offense. Oklahoma (2-0) has won 11 straight home games and 29 of its last 30.

Oklahoma was scoreless and trailed Kent State (0-2) as late as the final minute of the first half before Mims played key roles on touchdown drives to end the half and start the second. That helped the Sooners move to 4-0 against current Mid-American Conference teams.

"We faced some good adversity tonight," Brent Venables said after winning his second game in two tries as Oklahoma’s coach. "As I told (the team) at halftime, there’s nothing less important than the score at halftime. We were really prepared for exactly what happened. We talked about it all week.

"I was hopeful for some strain and a challenge. There’s not going to be change and development and improvement without a challenge. I’m glad that that happened."

Collin Schlee passed for 131 yards and rushed for 55 yards for Kent State, which is the only Football Bowl Subdivision team this season playing three nonconference games against opponents from Power 5 conferences. The Golden Flashes lost their opener at Washington and will visit No. 2 Georgia in two weeks.

Kent State played the Sooners on even terms in the first half and Oklahoma was fortunate to be ahead 7-3. The Golden Flashes had 11 first downs to Oklahoma’s seven and limited the Sooners to only 7 rushing yards before halftime. To that point, Kent State had converted on six of 11 3rd-down attempts and owned a two-to-one edge in time of possession.

"I thought our kids played relentlessly hard in the first half. It was obviously a game of two halves there," Kent State coach Sean Lewis said. "We gave up some explosive plays to start the second half and turnovers proved costly. The game got away from us against a really talented team … and you can’t put yourself in that position. They’re a talented ball club and well-coached, and we showed that we’re talented as well."

After a 15-play, 72-yard drive, Andrew Glass gave the Golden Flashes a 3-0 lead, kicking a 37-yard field goal with 8:27 left in the second quarter. With 1:10 left before halftime, Glass pushed a 41-yard attempt wide right.

Suddenly, Oklahoma’s offense — which mostly had been ineffective to that point — came to life, moving 76 yards in five plays. The final three were passes from Gabriel to Mims covering 13, 14 and 36 yards, the latter for the touchdown 18 seconds before halftime.

Gabriel targeted Mims on the first two plays of the second half — one a catch, one drawing a pass-interference penalty — and the Sooners again were off and rolling. Marcus Major capped that drive with a side-stepping 16-yard touchdown run to make it 14-3.

It quickly snowballed for Oklahoma. Billy Bowman recovered a Kent State fumble at the Golden Flashes’ 34 and Zach Schmit subsequently booted a 25-yard field goal to extend Oklahoma’s lead. Gabriel’s 18-yard scoring pass to Drake Stoops on Oklahoma’s next possession put the Sooners ahead 24-3, with 5:31 still remaining in the third quarter. Stoops’ score came two plays after a 44-yard run by Eric Gray, who had 71 yards on 10 carries.

Oklahoma stopped Kent State on downs at the Sooners’ 18 late in the third quarter, essentially ending any hopes of a rally by the Golden Flashes. Mims’ second touchdown came next, a 58-yard catch-and-run from Gabriel, capping a 24-point quarter for the Sooners during which they had 99 rushing yards.

Oklahoma picked up a fourth-quarter safety when linebacker David Ugwoegbu forced Schlee out of the end zone after the quarterback retreated to field a high snap.

"We had some things that didn’t go our way on many occasions, but we buckled down and responded within drives to either execute and put the ball in the end zone, or on defense, we found a way to get off the field and get a stop when we needed to," Venables said.

Kent State finished with 295 yards of offense, with Marquez Cooper rushing for 55 yards on 22 carries and Dante Cephas catching four passes for 50 yards.

Kent State: The Golden Flashes, picked by Mid-American Conference coaches as the preseason MAC East Division favorite, threw a scare into a top-10 team as they navigate their early season gauntlet. The strong defensive showing against the Sooners in the first half should give Kent State confidence going forward.

Oklahoma: After a quick offensive start to the season – three touchdowns in the first nine minutes in the season opener against Texas-El Paso — the Sooners sputtered somewhat on that side of the football, particularly in the run game, until the third quarter against Kent State. They’ll want to iron out any offensive issues before visiting Nebraska next Saturday.

On a day in which No. 6 Texas A&M (to Appalachian State) and No. 8 Notre Dame (to Marshall) both lost at home, simply surviving and winning might be enough for the Sooners to ease up a spot in the AP Top 25.

Mims’ 58-yard touchdown catch in the third quarter was his 14th career catch of 40 yards or more for Oklahoma. The junior had career highs in catches and receiving yards. It was the fifth time Mims has caught multiple touchdown passes in a game. Early in the fourth quarter, he added a 41-yard punt return that set up the Sooners at the Kent State 48.

"He’s able to run really fast," Lewis said of Mims. "He got behind us and a talented quarterback was able to throw it deep and they played catch and made us pay."

Kent State: The Golden Flashes will host Long Island in their home opener next Saturday before visiting Georgia on Sept. 24.

Oklahoma: After renewing their longtime rivalry with Nebraska last season, the Sooners will visit the Cornhuskers next Saturday. It will be Oklahoma’s first visit to Lincoln since 2009.