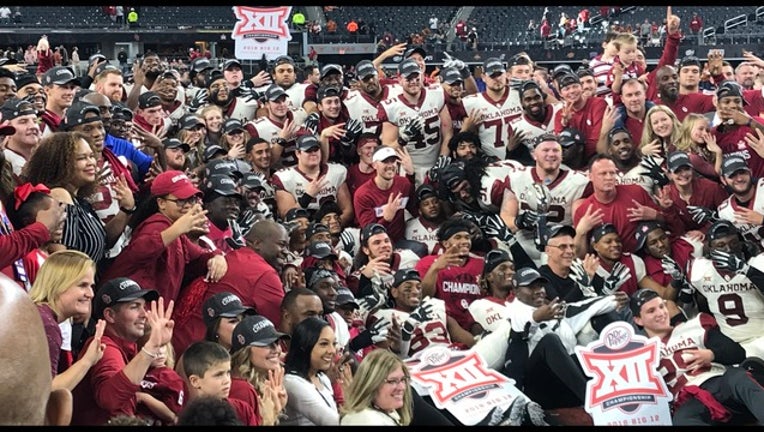 Faced with a tricky choice, the College Football Playoff selection committee fell back on some simple criteria: One loss is better than two. Winning a conference championship is better than not. Go with the team that didn't get blown out.

Oklahoma is in the playoff, moving into the fourth and final spot Sunday after avenging its only loss by winning the Big 12 championship against Texas.

"I feel like we have a team worthy of it, a team that can go make a run," Sooners coach Lincoln Riley said on ESPN.

The Sooners (12-1) will face No. 1 Alabama (13-0) in the Orange Bowl on Dec. 29 in a matchup of Heisman Trophy front-runner quarterbacks - Kyler Murray of Oklahoma and the Tide's Tua Tagovailoa, who sprained his ankle in the Southeastern Conference championship game Saturday and is expected to miss at least two weeks.

Georgia (11-2) dropped a spot to fifth and Ohio State (12-1) remained sixth in the selection committee's final top 25 released Sunday. The Bulldogs lost to Alabama in the Southeastern Conference championship game Saturday while the Buckeyes won the Big Ten championship against Northwestern.

Selection committee protocol states conference championships work as a virtual tiebreaker when teams are close. The Sooners beat Texas for the Big 12 title on Saturday, paying back a three-point loss in October in Dallas in the Red River Rivalry game.

Oklahoma is making its third appearance in the five-year-old playoff. Defending national champion Alabama has played in them all. Clemson is making its fourth straight appearance. Notre Dame is in the playoff for the first time, making it 10 teams in five seasons to participate in the playoff. Unbeaten UCF finished eighth in the final rankings, nowhere to be found in the committee's playoff discussion. The Knights will take their 25-game winning streak to a marquee bowl game, probably the Fiesta Bowl. The rest of the New Year's Six bowl pairings were to be announced later Sunday.

The debate leading up to championship Saturday was whether Oklahoma or Ohio State might take the fourth spot if Alabama beat Georgia.

The wild card was Georgia beating the mighty Tide, which could have meant two SEC teams for the second straight season. Instead, the Bulldogs lost but played well enough to allow coach Kirby Smart to make that case that Georgia should remain in the top four. Smart told reporters after the SEC title game to ask Alabama coach Nick Saban which team he would like to avoid in the playoff? Saban, of course, endorsed his former defensive coordinator and conference-mate.

The committee didn't buy it and stayed with the one consistent data point throughout the five years of playoff selections: No team with more than one loss has ever made the playoff. Of the 20 teams that have been selected, only two have not won a conference title.

For the second straight season, two of the Power Five conferences were left out and for the second straight season it was the Big Ten and Pac-12. Ohio State was the first team out last season and again appears to have gotten squeezed because of a lopsided loss to an unranked team. The Buckeyes were blown out by Purdue in October, similar to the way they lost at Iowa in 2017.

The Pac-12 was never really in the discussion, with its champion Washington finishing 10-3.

Georgia had both two losses and a blowout loss (at LSU, by 20 in October). The Bulldogs have been rolling since and had Alabama on the ropes before the Tide erased a 14-point deficit. The Bulldogs proved they could hang against the best, but it was not enough.

Oklahoma has had defensive issues all season, but its offense has been virtually unstoppable.