Marvin Mims had scoring catches of 50 and 61 yards and set up one of Gabe Brkic’s four field goals with a 38-yard punt return, while Rattler averaged almost 26 yards per completion with five connections of at least 33 yards.

Unranked since the first week of October, Oklahoma (3-2, 2-2 Big 12) hasn’t gone this long outside the Top 25 since 1999, when former coach Bob Stoops started building what became a perennial contender again before it was passed along to Lincoln Riley.

The Sooners had never been unranked in three-plus seasons under Riley before consecutive losses to Kansas State and Iowa State sent them tumbling out of the poll from a familiar spot in the top five.

But OU built on a four-overtime win over rival Texas by returning to the Dallas-Fort Worth area two weeks later and dominating the Horned Frogs (1-3, 1-3). 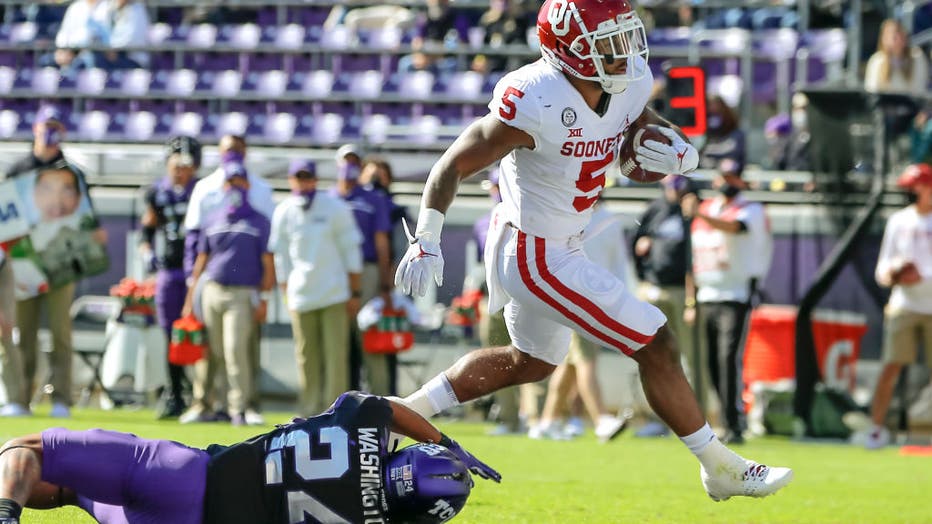 It was the Sooners’ seventh straight win in the series, a streak that includes the 2017 Big 12 championship game, and they are 9-1 against the Horned Frogs since TCU joined the Big 12.

Max Duggan threw his only touchdown pass with the game out of reach late in the fourth quarter as TCU lost its second straight since beating the Longhorns in Austin when Texas was ranked in the top 10.

Mims, a freshman playing not far from his home in the suburbs north of Dallas, had his first 100-yard game with 132 yards on four catches and is up to a team-leading six touchdowns.

Rattler had a 43-yard completion to Seth McGowan on the opening drive, which ended with 12-yard scoring run by T.J. Pledger, a junior who has had the first two 100-yard outings of his career the past two games. He had 122 against TCU.

A 44-yarder to Theo Wease led to a field goal on OU’s second possession as Rattler finished 13 of 22 without an interception as the Big 12 leader in that category coming in ended a three-game streak with at least one pick.

Oklahoma: TCU’s reputation through the years as one of the best defensive programs in the country is well-deserved. But it hasn’t help up very well against the high-powered OU offense. The Sooners fell just short of their sixth 500-yard game in the past seven against the Horned Frogs. In those seven games, OU has outgained TCU by more than 160 yards per game.

TCU: The steady decline of the offense from the season opener continued. While the Horned Frogs avoided a season low in total yards, a good chunk of their 351 yards came with the game out of reach in the fourth quarter. That was also after coach Gary Patterson essentially conceded by punting on fourth down with less than a yard to go from his 19-yard line trailing 30-7 midway through the fourth.

Oklahoma: At Texas Tech next Saturday.

TCU: At Baylor next Saturday.