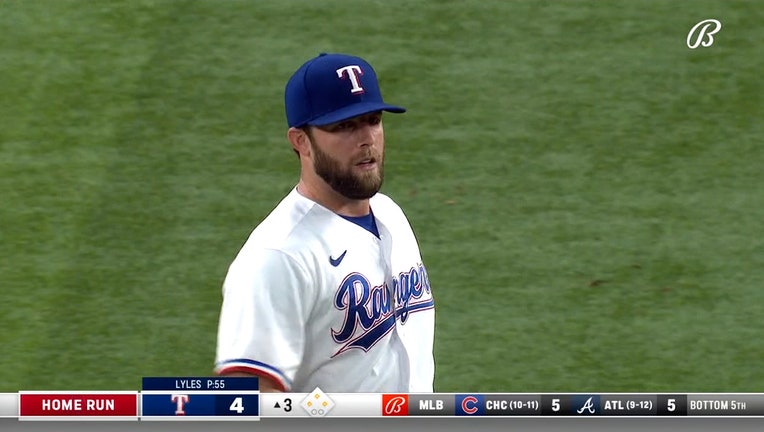 ARLINGTON, Texas - Shohei Ohtani struck out nine after a shaky first inning on the mound, and also scored three runs and drove in two in a start like none since Babe Ruth 100 years earlier, as the Los Angeles Angels beat the Texas Rangers 9-4 on Monday night.

A day after hitting his seventh homer to tie for the MLB lead, Ohtani (1-0) became the first home run leader to be the starting pitcher for a game since Ruth for the New York Yankees against Detroit on June 13, 1921. It was the second time this season Ohtani pitched and batted second.

The Japanese right-hander gave up four runs in the first inning before retiring 14 of the last 15 batters he faced, with all of his strikeouts in that span.

After drawing a one-out walk and scoring on Jared Walsh's single in the Angels first for a 1-0 lead, Ohtani threw 28 pitches in the bottom of that inning, included four walks, a hit batsman and a wild pitch. But the game was tied at 4 in the second after

Texas went ahead on Nate Lowe's sixth homer, a three-run shot that gave him an MLB best-matching 21 RBIs. David Dahl's sacrifice fly made it 4-1, the first of the final 15 batters Ohtani faced in his five innings.

In his previous start on the mound, last Tuesday at home against the Rangers, Ohtani became the first starting pitcher since at least 1901 with four scoreless innings with at least six walks and seven strikeouts. He allowed only one hit in the Angels’ 6-2 victory.

That was his first time on the mound since April 4 after dealing with a blister issue on the middle finger of his throwing hand. In that first start, Ohtani both smashed a 451-foot homer and pitched two-hit ball into the fifth inning against the Chicago White Sox.

Only seven of his first 23 pitches in Texas were strikes before Ohtani settled in, needing only 47 pitches to get through the his final four innings. He got one last at-bat in the sixth, with a bunt single away from the shift before scoring on a double by Walsh. Aaron Slegers then took over on the mound and in the batting order, though he didn't get an at-bat.

Angels: 3B Anthony Rendon was back in the lineup after missing 11 games with a left groin strain. He was activated from the injured list before the game. To make room on the roster, the Angels optioned infielder Luis Rengifo.

Rangers: To make room on the 40-man roster for Yang, the Rangers transferred first baseman/outfielder Ronald Guzmán (torn meniscus right knee) from the 10-day to 60-day injured list. Guzmán was placed on the injured list April 13, and is scheduled to have season-ending surgery Wednesday.

Rangers RHP Mike Foltynewicz (0-3, 5.32 ERA) and LHP José Quintana (0-1, 9.00) are the starting matchup again, like last Wednesday in a series finale at Los Angeles that the Rangers won 7-4. Foltynewicz has given up an MLB-high eight homers, including solo shots to Ohtani, Trout and Upton last week.