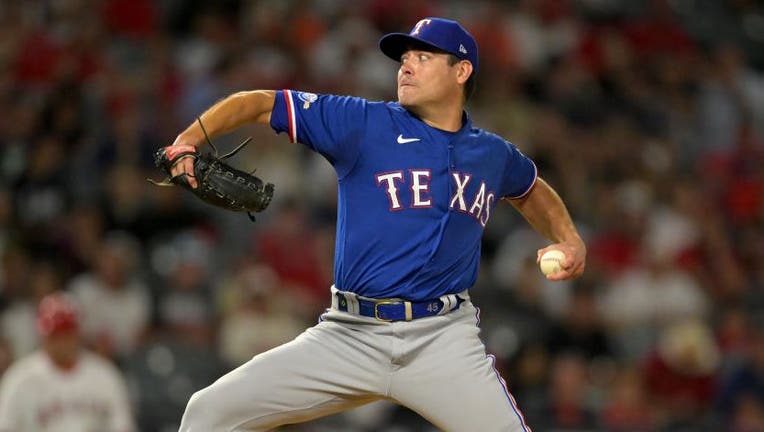 ANAHEIM, CA - JULY 28: Matt Moore #45 of the Texas Rangers earns a save in the ninth inning defeating the Los Angeles Angels at Angel Stadium of Anaheim on July 28, 2022 in Anaheim, California. (Photo by Jayne Kamin-Oncea/Getty Images)

ANAHEIM, Calif. - Shohei Ohtani dazzled batters with his wicked slider, blew them away with his 100-mph fastball and repeatedly pitched out of trouble while racking up 11 strikeouts.

The AL MVP's latest impressive start also included a few mistakes, and Ohtani and his fellow Angels couldn't manage any runs to make up for them during an encouraging win for the Texas Rangers.

Nathaniel Lowe homered and tripled, and Corey Seager had an RBI double among his three hits off Ohtani in Texas’ 2-0 victory over Los Angeles on Thursday night.

Although he escaped trouble repeatedly — most impressively on three straight strikeouts after Texas loaded the bases in the first — Ohtani lost his second straight start while pitching with a chance for his career-best 10th mound victory.

"I would not want to face him," Texas manager Chris Woodward said. "We get the bases loaded right there, and he just turns it up to another gear. That slider is like a wiffle ball. Guys are missing it. We were fortunate today to get a couple of runs off him, honestly. Lowe just squeaked that ball over the fence, and Corey with a big two-out hit there. Man, he’s tough to beat, so we obviously did something pretty good today."

Ohtani leads the majors with nine double-digit strikeout performances, and he pitched six scoreless innings with 11 strikeouts in Atlanta last week before the Braves tagged him for six runs in the seventh. The Angels scored no runs while Ohtani was pitching in either of those two starts, and Ohtani went 0 for 4 as their leadoff hitter against Texas.

Ohtani could be understandably weary of the week-to-week exhaustion of playing for the perpetually underachieving Angels, and when asked if he still wants to be in Anaheim after the trade deadline next week, Ohtani equivocated a bit in translator Ippei Mizuhara's relay of his answer.

"Regardless of where I’m playing, I’m going to give it my all and try to win that ballgame in front of me," Ohtani said. "I’m with the Angels right now, and I’m very thankful for what they’ve done. I love my team and my teammates. Right now I’m an Angel, and that’s all I can focus on."

Spencer Howard (2-2) pitched five innings of three-hit ball on his 26th birthday for the Rangers, who snapped a three-game skid while opening the final series on their 11-game trip. Although Howard gave up three extra-base hits, the Angels didn't advance those runners and didn't get another baserunner against him.

"Felt pretty good, like a step in the right direction," Howard said. "Really happy with the execution of pitches, the result."

Matt Moore, who could be on the move at the deadline, pitched the ninth for his second save, completing a five-hitter. The Angels were shut out for the 10th time this season.

Luis Rengifo tripled, doubled and singled for the Halos, who failed to win three straight games for the first time since June 19. Los Angeles has lost 16 of 21 during its freefall from playoff contention.

Lowe's 15th homer of the season leading off the fourth was the second of his career off Ohtani, who again struck out Texas' next three hitters.

Relying heavily on his slider and using his fastball sparingly, Ohtani had just one 1-2-3 inning against the Rangers. Lowe led off the sixth with a triple, but Ohtani retired his final three batters.

Ohtani is the second Angels pitcher ever to record six straight 10-strikeout starts. Nolan Ryan did it in a record seven straight starts in 1977, and he had a six-game streak spanning 1972-73.

Seager left with a bruise on his lower right leg during the sixth inning, interrupting an impressive night for the three-time All-Star. Seager fouled a ball off his leg in the fifth, but delivered his run-scoring double moments later. Seager's leg was "swollen pretty good," Woodward said. The manager doesn't think the injury is serious, although Seager could miss a game or two.

David Fletcher went 1 for 3 in his first game since May 7 for the Angels, doubling on the first pitch he saw in his return from hip surgery.

Rangers: RHP Joe Barlow threw a live batting practice session. He has been out since July 13 with a right index finger blister. He could go on a rehab assignment this weekend, as could infielder Brad Miller (neck).

Angels: Fletcher's absence forced them to use middle infielders who struggled to hit big league pitching. With Fletcher's return, the Angels sent rookie 2B Michael Stefanic back to Triple-A Salt Lake after he batted .167 in 16 games.