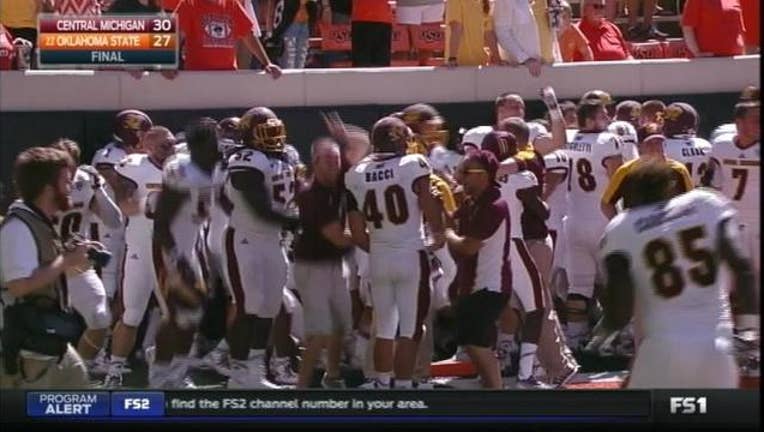 STILLWATER, Okla. (AP) — The officiating mistake was a doozy — and it cannot be fixed. The play that followed was even more astonishing.

A misinterpreted rule extended the game when it should have been over and allowed the Chippewas to score a wild, winning touchdown on a Hail Mary and lateral — yes, both! — that covered half the field for an 30-27 upset of No. 22 Oklahoma State on Saturday.

Oklahoma State (1-1) tried to kill the final 4 seconds of the game by throwing the ball away on fourth down, but the Cowboys were penalized for intentional grounding, which is a loss of down penalty. Rules state that the game cannot end on an accepted live-ball penalty, referee Tim O'Dey of the Mid-American Conference, CMU's league, said.

But he later admitted there a situation where the game can end.

"There's an exception to the rule that says if enforcement of the foul involves a loss of down, then that brings the game to an end," O'Dey told a pool reporter.

O'Dey said after conferring with NCAA rules committee secretary Rogers Redding after the game, the crew determined the "extension should not have happened."

But the final result stood. Article 3b of the NCAA rulebook states: When the referee declares that the game is ended, the score is final.

"Despite the error, this will not change the outcome of the contest," Bill Carollo, the NCAA's coordinator of football officials, said in a statement released by the MAC.

That did not satisfy Oklahoma State athletic director Mike Holder.

"We had conversations with everyone that could help us understand the situation and do something about the outcome. We were told the result is final and there is nothing we can do about it," Holder said in a statement. "In my mind, it is incomprehensible that a misapplication of the rules after time has expired can't be corrected."

Big 12 Commissioner Bob Bowlsby said in a text to the AP: "The game is final and errors can only be corrected during the course of the game. Very unfortunate."

Corey Willis scored the winning touchdown after grabbing a lateral from Jesse Kroll at the Oklahoma State 12 and fighting his sway into the end zone.

Oklahoma State (1-1) thought it had won when Mason Rudolph threw the ball away on fourth down as the clock expired, instead of just taking a knee and risking giving the ball back to Central Michigan (2-0). But it backfired after the officials conferred, they assessed an intentional grounding penalty and gave Central Michigan another play.

"That's a tough one. Just so everyone knows, I was the one who called the passing play," said OSU coach Mike Gundy. "To be honest with you, I never even thought of intentional grounding being called at that point in the game. As much time as we put into end of game situations that never really crossed my mind. Unfortunately, that's a difficult way to learn a hard lesson."

Cooper Rush lofted up a Hail Mary pass that hit Kroll just inside the 10. As Kroll was being taken down, he pitched it back to Willis at about the 12, who cut across the field and barely managed to score while being dragged down.

"To be honest, I actually had a missed assignment on that, I wasn't supposed to be right there, but it all worked for the better," said Willis.

Coach John Bonamego said: "It's an improbable finish, but it's a situation that we practiced and rehearsed. We were able to execute and pull out the win."

Central Michigan fans might have been having flashbacks to the Bahamas Bowl from two seasons ago, when the Chips covered almost the length of the field on a long pass and lateral play to make it a one-point game with no time left against Western Kentucky. In that fabulous finish, Central Michigan went for 2 and the win and did not convert. This time around, the Chippewas were able run off with the victory.

SYMPATHY FROM THE DEVILS

Oklahoma State fans were livid, and they can now relate to Duke fans who watched their team lose a game on a multilateral kickoff return touchdown to Miami last season that the Atlantic Coast Conference later said should not have counted. Or maybe go back to 1990, when officials mistakenly gave Colorado five downs to score the game-winning touchdown against Missouri in the waning seconds.

Central Michigan is unlikely to go on to win a national title the way those Buffaloes did, but it will still go down as one of the biggest wins in school history.

Oklahoma State: The Cowboys will rightfully be upset by the bad call, but Gundy will be questioned for throwing on his final play.

Oklahoma State: How do AP voters deal with this? The Cowboys rightfully had the game won. They also allowed CMU to play them toe-to-toe at home when Oklahoma State was a big favorite. So maybe the Cowboys don't drop for the loss as much as for the underwhelming performance?

Central Michigan: This is no way to get ranked.