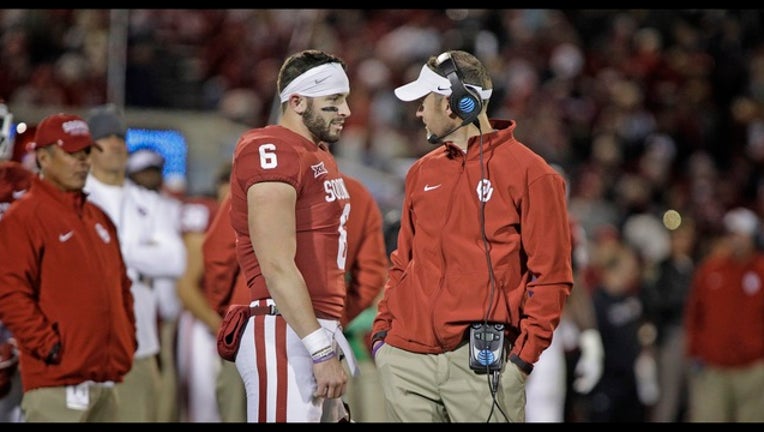 Baker Mayfield and Lincoln Riley of Oklahoma confer during a play review during the game against Texas Tech at Gaylord Family Oklahoma Memorial Stadium on October 28, 2017 in Norman, Oklahoma. (Photo by Brett Deering/Getty Images)

LOS ANGELES (AP) - Usually, the Heisman Trophy winner is able to keep it together during his acceptance speech long enough to get through most of the thank yous and shout outs. Right up until it's time to acknowledge the family. That is generally when the voice starts cracking and the tears start flowing.

Baker Mayfield was different. When he won the Heisman earlier this month, he started losing it even before he got to thanking mom and dad. Choking back tears, Mayfield said Oklahoma coach Lincoln Riley had changed his life.

"Coach Riley you've been a great mentor to me. Been through a lot together. So, appreciate ya," Mayfield said in between deep breathes.

The relationship between two former walk-ons, one who went one to win a Heisman and one who became the head coach at Oklahoma at 34, has turned into one of the great partnerships in college football and the most important reason the second-ranked Sooners are in the College Football Playoff for the second time in three seasons. Oklahoma plays No. 3 Georgia in the Rose Bowl on Monday.

"The two of them ascending together has been really neat to watch," former Oklahoma coach Bob Stoops said.

After being doubted so often, Mayfield found in Riley a coach who saw the potential for greatness that in Mayfield the player always knew was possible - if only he had the opportunity to show it. In return, Riley found a quarterback who could make his creative Xs and Os come to life and produce almost magical results.

"He would've been here without me," Mayfield said about Riley earlier this month in Norman, Oklahoma. "I wouldn't be in the position that I'm in without him. There's a difference in that. He was already very talented and special. There was a reason why he got hired here at such a young age. He's developed me and made into the player I am. I've worked hard and had great teammates around me, but he's the biggest reason why I'm standing here today."

Like Mayfield, Riley, 34, started his college football career as a walk-on quarterback at Texas Tech in 2002.

"Our situations kind of parallel each other in a lot of ways," Riley said earlier this week in southern California. "We both came in as walk-ons to this game and kind of understand that life and kind of the climb you have to have."

That's where the similarities end when it comes to their playing careers.

When Riley was still at ECU he pitched Mayfield on transferring to the Greenville, North Carolina, school, but Mayfield had already made up his mind. He transferred to Oklahoma as a walk-on in 2014 and had to sit out a season, per NCAA rules. In 2015, Stoops hired Riley to be Oklahoma's offensive coordinator. The Sooners had a returning starting quarterback in Trevor Knight, but Mayfield beat him out.

"We said from the day Baker came here, I told him he's going to have every opportunity every other guy has and then there's a fresh new guy (Riley) who doesn't have any bias to anyone. Lincoln comes in and gets to work with Baker and believed in him from the start," said Stoops, who was at Oklahoma practice on Friday.

In three years with Riley calling the plays and Mayfield executing them, Oklahoma has gone from 13th in the country in yards per play to second last season to first this season at 8.44, which is on pace to shatter the school record of 7.6 set in 1971.

"They communicate so well ... Lincoln isn't old enough to be his dad, so say he's a young uncle," Stoops said. "They're more like family than anything."

Defensive end D.J. Ward said the quarterback and coach sometimes don't even need signals to check in and out of plays. "It's like, wow, like nothing was really said, not a bunch of signals. They looked at each other, head nod, and that was it."

Maybe the most difficult decision Riley has had to make in his first season as Oklahoma's head coach to was strip Mayfield of his captaincy and not allow him to start the regular-season finale against West Virginia. The decision was punishment for boorish behavior by Mayfield a week earlier against Kansas. Riley choked up making the announcement of Mayfield's punishment. It was tough on Mayfield, too, but he never questioned the coach's intentions.

"We've been through a lot. I think that's also credit to the growing process when he came in, how young I was," Mayfield said. "I'm still young but there's been a lot of maturing in the process. It feels like we've been together longer than three years."