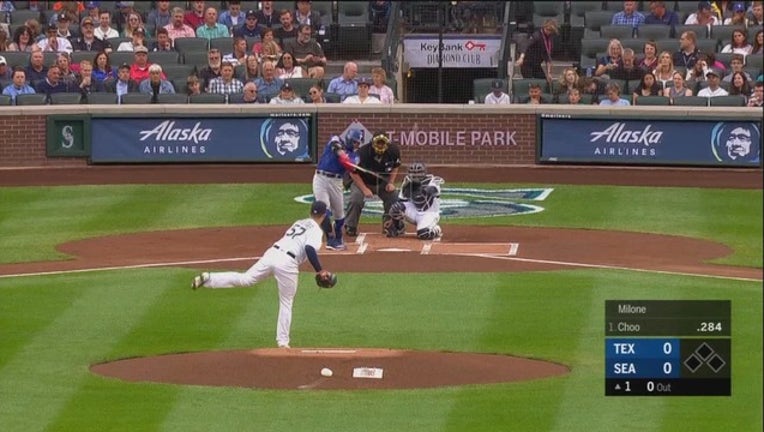 SEATTLE (AP) - As the losses mounted for the Texas Rangers during their eight-game skid, their daily hitting meeting turned into something of a therapy session.

Rougned Odor spoke positive words of encouragement to his team Tuesday afternoon, then backed it up with two home runs in a 7-2 win over the Seattle Mariners. Nomar Mazara reached the third deck with an impressive drive, Shin-Soo Choo hit a leadoff homer in the first and rookie pitcher Pedro Payano was excellent in relief to help the Rangers get back on track.

"We've been talking as a group for a while since we've been struggling," Rangers manager Chris Woodward said. "We use that forum to kind of discuss how to get out of (the streak). (Odor has) actually been pretty vocal over the last week or so. He was really honest."

The Rangers jumped on the Mariners' Tommy Milone from the first pitch, which Choo sent to the bullpen in left field, and hit four home runs to snap the major leagues' fourth longest losing streak of the season.

It was Choo's 10th career first-pitch home run, his sixth leadoff home run of the season and the 33rd of his career.

After Asdrubal Cabrera and Tim Federowicz made it 3-0 with a couple of RBIs in the second inning, it got worse for Milone in the third when Mazara hit a towering shot estimated at 458 feet for a 4-0 lead.

It was one of the more impressive hits at T-Moblie Park this season, just the second to reach the third deck in right field.

"I'm going to have to check StatCast on that because 458 feet doesn't sound right," Woodward said.

One out later, Joey Gallo laid down a bunt back to the mound. Milone fielded the ball, but his throw was wild and Gallo moved to second. Odor homered to right-center field for a 6-1 lead.

Milone pitched through the sixth inning, giving up nine hits and striking out five.

Odor added a solo home run in the eighth off new Mariners reliever Matt Magill for his third multihomer game of the season and 12th of his career.

Payano (1-0), called up Tuesday from Triple-A Nashville, struck out seven and gave up one run and three hits in five innings following opener Brett Martin. It was his first major league win in his second appearance.

The performance was so impressive, Woodward said he may have earned himself a longer stay through the team's road trip.

"I would think so," Woodward said. "I don't know for sure, but either way he opened a lot of eyes in our organization."

The Mariners are 2-8 since the All-Star break. Two of Seattle's hottest hitters, Omar Narvaez and J.P. Crawford, had run-scoring hits. But Seattle showed little else after snapping a three-game losing streak with a victory against the Rangers on Monday.

"We have to be patient with our guys," Seattle manager Scott Servais said. "We've seen some bright spots throughout the season so far, but just have to keep working with them."

Woodward thinks Ronald Guzman is Texas' first baseman of the future. To reach that goal, Woodward thought it best to send Guzman down to Triple-A Nashville for a while to work on his offense.

"One thing I told him when I sent him down, I'm really proud of him," Woodward said. "He's been working really, really hard on all the things we've been talking about."

Guzman is batting .193 with eight home runs and 29 RBIs in 68 appearances, including 56 starts at first base. Guzman was sent down to make room for Payano.

Rangers: Gallo was pulled before the start of the eighth with a sore right wrist that's bothered him for a while, Woodward said. X-rays were negative and Gallo likely will sit out Wednesday's series finale while undergoing an MRI.

Mariners: Domingo Santana will undergo an MRI on his sore right elbow Wednesday. Santana was pulled from the game after a rough-and-tumble series of plays in the second inning. The right fielder slid awkwardly while attempting to catch Logan Forsythe's bloop, then threw well wide of the plate trying to catch Odor at home on Asdrubal Cabrera's sac fly. Servais said the elbow has been tender for a while and the throws he made during the second inning caused enough pain to be of concern.

Rangers: LHP Mike Minor (8-5, 2.86 ERA) looks to end a three-game winless streak in the series finale against the Mariners.

Mariners: RHP Mike Leake (8-8, 4.27 ERA) returns to the mound for the first time since his complete-game one-hitter last Friday.