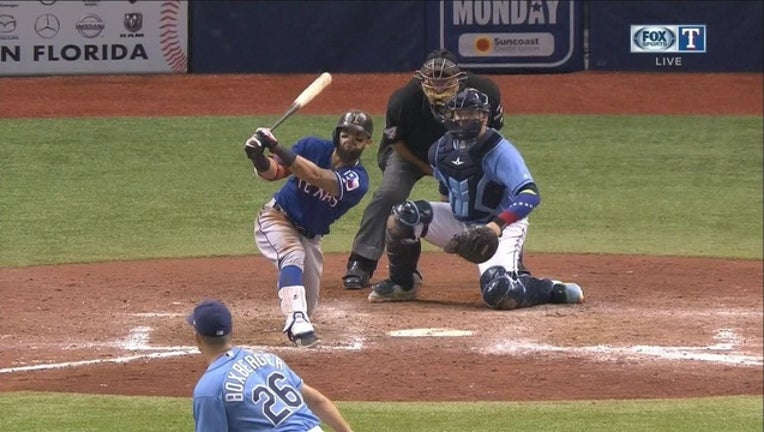 ST. PETERSBURG, Fla. (AP) - The Texas Rangers were floundering with a five-game losing streak when they arrived Friday in Florida.

The Rangers left the Sunshine State after a weekend stay surging.

Rougned Odor homered twice, including back-to-back drives with Carlos Gomez in the eighth inning, and the Rangers rallied to beat the Tampa Bay Rays 6-5 on Sunday and complete a three-game sweep.

"To win in the fashion that we did in this set of three, comeback wins, show heart and grit that these guys have," Texas manager Jeff Banister said.

Texas trailed by three runs in two of games, and two in the other.

"That's what it's all about right now for us, don't give up until that last opportunity," Rangers shortstop Elvis Andrus said. "We did it again, comeback."

Tampa Bay has an AL-high 31 losses after holding a lead.

Joey Gallo also homered for the Rangers, who had not swept a series of three or more games at Tampa Bay since July 1999. Adrian Beltre tripled and singled, moving within 11 of 3,000 hits.

Matt Bush (3-4) pitched a scoreless seventh, and Jose Leclerc got his second save despite two walks in the ninth.

Aided by four walked from Tyson Ross, the Rays scored three times in the fourth for a 5-2 lead. Mallex Smith had a two-run double and Brad Miller drew a bases-loaded walk.

Beltre got his 37th triple and first since July 20 last year, then scored on Mike Napoli's sacrifice fly. Odor's solo homer off Jake Odorizzi put the Rangers ahead 2-0 in the second.

Odorizzi gave up three runs and four hits in four-plus innings. He has allowed a homer in 15 consecutive appearances.

Ross gave up five runs and four hits in 3 2/3 innings. He has allowed 14 runs over seven innings in last two starts.

Rangers catcher Robinson Chirinos departed with a sprained left ankle after a collision at the plate with Adeiny Hechavarria in the fourth. X-rays were negative.

New Rays reliever Sergio Romo could join the team Monday, two days after he was acquired from the Los Angeles Dodgers. "Anytime a guy that throws mid to upper 80's, when they hit a rough patch, it's easy to say, well, he's toast," Rays general manager Erik Neander said. "The way he works, coming to a league that hasn't seen him before, we think there's a chance that he can really help us."

Gallo has homered in 12 ballparks this season. "It's really cool," said Gallo, who wasn't aware of the accomplishment until he saw it on the scoreboard.

Rangers: LHP Martin Perez (5-7) is to start against Miami and RHP Adam Conley (2-3) on Monday night as Texas opens a nine-game homestand.

Rays: LHP Blake Snell (0-5) and Baltimore RHP Kevin Gausman (6-7) are Monday night's starters. Snell's 19 starts of five innings or fewer are the most by an AL pitcher within his first 30 big league games since 1913, according to Baseball Reference.