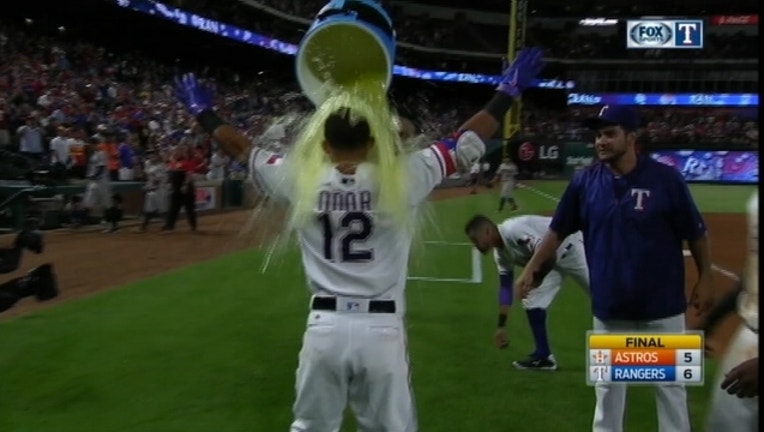 ARLINGTON, Texas (AP) — Rougned Odor knew the ball was going to the wall, and that Adrian Beltre was going to score the winning run from first base.

The Texas Rangers always seem to find a way to beat the Houston Astros.

Odor's game-ending RBI double ricocheted off the wall and past left fielder Colby Rasmus, giving the Rangers a 6-5 victory on Monday night. They are 7-0 this season against the Astros, who have now lost 11 in a row on the road against their AL West and instate rivals.

"I'm just trying to put the ball in play and drive the run in," said Odor, who also had a solo homer and a sacrifice fly in only his third game back since his seven-game MLB suspension for punching Toronto's Jose Bautista in a testy game last month.

Nomar Mazara had a one-out single in the ninth, the rookie's fourth hit of the game, off Ken Giles (0-3). Beltre dropped to a knee when he swung and hit a grounder to shortstop Carlos Correa, who fielded the ball cleanly before it got caught briefly in his glove. While Mazara was out at second, the 37-year-old Beltre hustled to beat the relay and avoid an inning-ending double play.

"It's something that we pride ourselves in, we respect the 90 feet and we run hard," manager Jeff Banister said. "For Adrian to continue to grind it out, that's how much these guys want to win.

The Rangers, whose 35-22 record is the best in the American League, have won four in a row and eight of nine. The Astros entered the game having won eight of nine and 11 of 13.

"We have more talent than this team (Rangers) does, I believe," Giles said. "We shouldn't be losing these kind of ballgames. We're gonna have to go out there tomorrow and just put them to the ground. That's all we've got to do."

Manager A.J. Hinch said Odor's ball carried farther than expected, and that the ball was "a little tweener for Colby on whether to sit and play it off the wall or try to get back there. It was a timely, well-placed hit."

Odor led off the third with his eighth homer for a 4-3 lead. His sac fly in the seventh tied the game at 5-all.

Sam Dyson (1-1), the fourth Texas pitcher, had a perfect ninth.

Rasmus had an RBI single in the seventh that gave Houston its only lead — 5-4 when Correa scored from second. Correa walked and went to second on a wild pitch.

Altuve's 10th homer tied the game at 3 right after starter Colby Lewis' throwing error while trying to get the lead runner.

Lewis gave up four runs (three earned) in six innings before leaving with the game tied 4-all and keeping two winning streaks on hold. He has won all five decisions in his 12 starts this season and has won nine in a row against the Astros, the longest streak of his career against any team.

The Rangers went up 3-0 in the first. Jurickson Profar had a leadoff triple and scored on Ian Desmond's infield single, a chopper fielded by the first baseman while starting pitcher Mike Fiers didn't go cover the base. Desmond later scored on a wild pitch and struggling slugger Prince Fielder had an RBI single in his first at-bat after getting an unwanted two-game break.

Profar has hit safely in each of his first 16 career starts in the leadoff spot, a Rangers record. Profar has led off in all 10 games he has played this season, and his 10-game hitting streak is one shy of Elvis Andrus for the longest for a Ranger this season. ... It was the second game the Rangers won in their last at-bat this season. It was Houston's third such loss.

Rangers: RHP A.J. Griffin, on the DL since May 8 with right shoulder stiffness, threw a 25-pitch bullpen session. If he feels good the next couple of days, he could go out on a rehab assignment later this week.

Astros: LHP Dallas Keuchel (3-7, 5.50 ERA), the reigning AL Cy Young Award winner, has a 3.46 ERA his last two starts since allowing seven runs in six innings in a 9-2 loss to the Rangers and Cole Hamels on May 22. Keuchel is 0-2 in two starts against Texas this season.