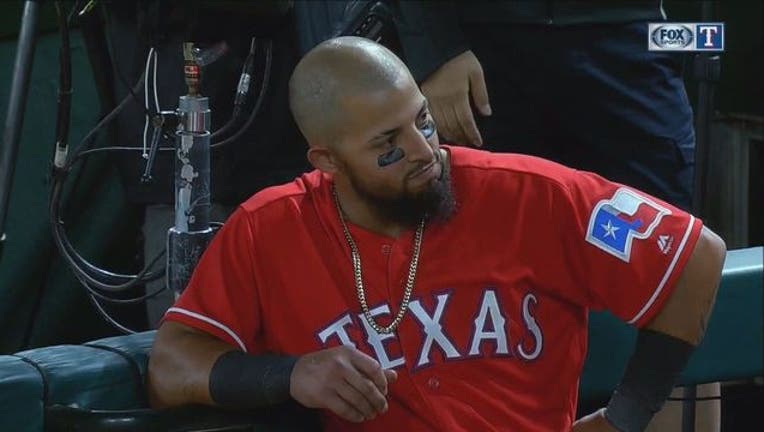 SEATTLE (AP) - A stellar performance by the Texas bullpen gave the Rangers enough time for Rougned Odor to come through with the missing big hit.

Odor hit a two-run home run in the 13th inning and the Rangers got six innings of shutout relief pitching to beat the Seattle Mariners 3-1 early Saturday.

"For him to step up in that situation poised, and we've seen him do it before, and put a great swing on a pitch he was able to get out of the ballpark. ... He's full of confidence anyway but something that will allow him to build off of," Texas manager Jeff Banister said.

The game lasted five hours and was tied from the fourth inning on despite plenty of scoring opportunities for the Mariners. Odor finally broke the tie, hitting his sixth homer of the season into the right field seats off reliever Emilio Pagan (0-1).

Sam Dyson, Tony Barnette, Matt Bush (2-0) and Alex Claudio combined to shut out Seattle after starter Yu Darvish allowed one run in seven innings. Seattle's only run came on Robinson Cano's home run leading off the fourth. The Mariners were 0 for 12 with runners in scoring position.

Seattle missed a chance to win in the 10th after Jean Segura led off with a double. Ben Gamel failed to get down a sacrifice bunt and struck out on three pitches, and Cano was intentionally walked. The inability to get the bunt down loomed after Nelson Cruz flew out to center for the second out that likely would have been deep enough to score Segura. Kyle Seager grounded out to first to end the threat.

"Bunting is not as easy as it looks," Barnette said. "I made some good pitches, the first one was pretty much right at his face and luckily he fouled it off. That helped change the inning around."

Seattle lost two pitchers to injury in the span of two batters in the 11th. Jean Machi left with two outs after walking Carlos Gomez and suffering from a nerve issue in his right thumb that made it difficult to feel the ball. Evan Marshall, just called up from Triple-A on Friday, was given time to get ready, but on his second pitch to Joey Gallo, he screamed in pain and grabbed at the back of his right leg as he dropped to the ground. He had to be helped off the field, and after another lengthy delay, Pagan struck out Gallo.

Servais said Marshall would be out a significant amount of time with a hamstring injury.

Texas scored in the first thanks to replay. Elvis Andrus' fly ball down the right field line was originally ruled foul, but replay showed the ball touched off Ben Gamel's glove in fair territory before landing foul. Andrus was given a ground-rule double, and Delino DeShields scored.

"Our guys stayed engaged, continued to play and made some plays," Banister said.

Darvish topped 100 pitches for the fourth time in his last five starts, getting through seven innings mostly untouched. He walked four batters, but offset control issues by allowing only six hits and three times leaving runners stranded at second. His best escape came in the seventh when Guillermo Heredia walked and reached third with one out thanks to a wild pitch. But Darvish struck out Jarrod Dyson and got Segura to fly out to center.

Seattle starter Yovani Gallardo was just as good as Darvish. Gallardo allowed four hits in six innings and rebounded after giving up four earned runs in two of his previous three starts.

Rangers: Texas made a small move in its minor league system, trading catcher Pat Cantwell to Toronto for a player to be named later or cash. Cantwell was at Triple-A Round Rock.

Mariners: Seattle made a flurry of roster moves, highlighted by left-handed starting pitcher James Paxton landing on the 10-day disabled list due to a strained forearm. Seattle also optioned starting catcher Mike Zunino to Triple-A Tacoma as he continued to struggle at the plate with a .167 batting average. The Mariners recalled infielder Mike Freeman, catcher Tuffy Gosewisch and Marshall to fill the open roster spots.

Rangers: Martin Perez (1-4) makes his seventh start of the season. Perez has allowed three runs or less in four of his first six outings but the Rangers are just 1-5 in games he has started.

Mariners: Chase De Jong (0-2) makes his second start since moving into the rotation after Felix Hernandez went on the disabled list. De Jong gave up six earned runs against Cleveland in his first start.