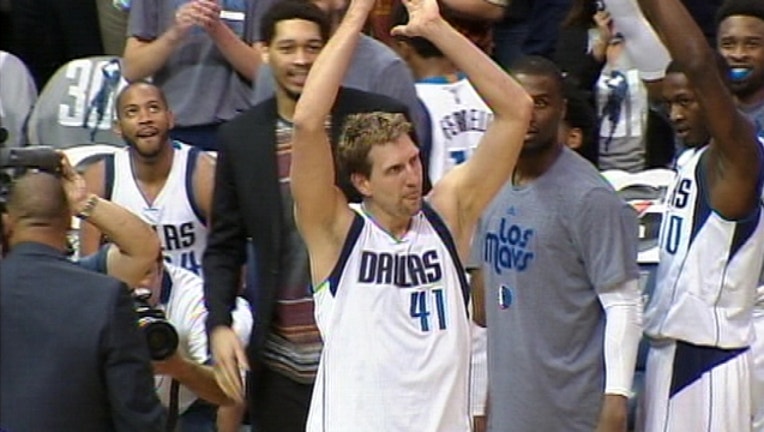 DALLAS (AP) - Dirk Nowitzki made peace years ago with the reality that spending his entire career with the Dallas Mavericks would likely mean little or no chance to win a second championship.

The most accomplished European player in NBA history never seriously considered leaving the franchise that courted him as a teenager in Germany and drafted him five days after his 20th birthday in 1998.

Now in his 20th season, Nowitzki is comfortable with the idea that he led the Mavericks to their first title and can try to help a younger core build toward making Dallas a title contender again.

The Mavericks haven't won a playoff series since beating Miami in the Finals in 2011, LeBron James' first season with the Heat. They had a woeful start for the second straight year, all but assuring that they will miss the playoffs with consecutive losing seasons for the first time since Nowitzki's first two.

The slide out of contention means little to the context of Nowitzki's career: a 7-footer who changed the game with his 3-point shooting, the first foreign-born player to reach 30,000 points and the distinction with Kobe Bryant (Lakers) as the only players to spend 20 seasons with the same franchise.

"I think the reality is that when you see this kind of consistency of greatness, there's a tendency to take it for granted," said Rick Carlisle, in his 10th season as Nowitzki's coach. "And we must be careful about taking this for granted. We're seeing a generational player that's changed the game."

Nowitzki still starts - Carlisle pretty much declared earlier this season that he will start as long as he's playing - but often sits at the end of close games. He's probably the fourth scoring option, behind Harrison Barnes, Wesley Matthews and even rookie point guard Dennis Smith Jr.

But the 39-year-old played the first 54 games, an important measure for him to feel he's contributing. Nowitzki, the only 7-footer to win the 3-point contest that's part of All-Star weekend, is in position for the best shooting percentage of his career from beyond the arc. The number of attempts isn't far off from his prime either.

"I wish he can play forever," said Washington coach Scott Brooks, who was at Oklahoma City when the Thunder lost to the Mavericks in the 2011 Western Conference finals and beat them in the first round the next year.

"You know the time is winding down, you don't know how many more years he has. He probably has maybe six or seven more left in him," Brooks said, trying to keep a straight face.

Nowitzki has already said he is considering a 21st season. Barring a dramatic improvement through a trade, the draft or free agency, that likely means another year of helping turn Smith into a point guard that can guide a champion the way Nowitzki credits Jason Kidd for doing in Dallas.

Assuming the Mavericks stay near the bottom of the West standings, they'll have another high draft pick after getting Smith at No. 9. That will be another young player who sees the work Nowitzki does away from the court to stay in shape, and a 13-time All-Star who is frequently the last player to quit shooting after practice.

J.J. Barea spent his first five seasons with the Mavericks and was still a relatively young guard at 26 when the Mavericks won the title.

"I used him a lot," said Barea, who returned to Dallas three years ago. "If I work half of what he does, I'm going to be all right. These guys, they really didn't get him at his best like I got him. But they still see how hard you've got to work to be able to play out there with us."

Nowitzki doesn't mind admitting that practice isn't quite as fun as it used to be.

"But once the ball goes up, it's still great," said the 2007 MVP, who has career averages of 21.4 points and 7.7 rebounds. "I still love to compete. I still love to be out there for the guys and trying to help them with my experience and spread the floor for them and maybe getting some timely scoring here and there."

Always big on self-deprecation, Nowitzki quips that he can't help the younger players by showing them any moves. He doesn't have to be joking to acknowledge that his patented one-legged fadeaway jumper isn't nearly as dangerous as it was when he was Finals MVP.

What Nowitzki can offer is work ethic and experience, not to mention longevity. He became the sixth NBA player to reach 50,000 minutes Tuesday night at the Los Angeles Clippers.

Nowitzki always finds a way to steer the conversation back to the present - and future.