DALLAS (AP) - Josh Norris score two goals in his U.S. NHL debut, and the Ottawa Senators snapped a three-game losing streak with a 4-1 win over the Dallas Stars on Friday night.

The 22-year-old Norris, the 19th overall pick in the 2017 NHL draft by the San Jose Sharks, was playing his first NHL game in the U.S. In his third season, Norris played just three games, all in Ottawa, in 2019-20.

The Senators played in the U.S. for the first time since 2019-20, after opening the season with five of their first six games at home and another contest in Toronto.

Joe Pavelski scored in the second period for Dallas. Braden Holtby had 20 saves for the Stars.

On the game's first power play, Tim Stutzle's shot was blocked and Norris picked up the puck in front and scored at 5:49 of the first period.

Tkachuk scored Ottawa's second unassisted goal at 7:55 of the first period on a snap shot from the slot for a 2-0 lead.

Norris' second goal came on a pass from Drake Batherson between the circles. Norris scored past Holtby at 7:41 of the second for a 3-0 lead.

The Stars scored 35 seconds into their first power play, at 10:38 of the second period. Joe Pavelski took a cross-ice pass from Alexander Radulov and sent the puck past Gustavsson. 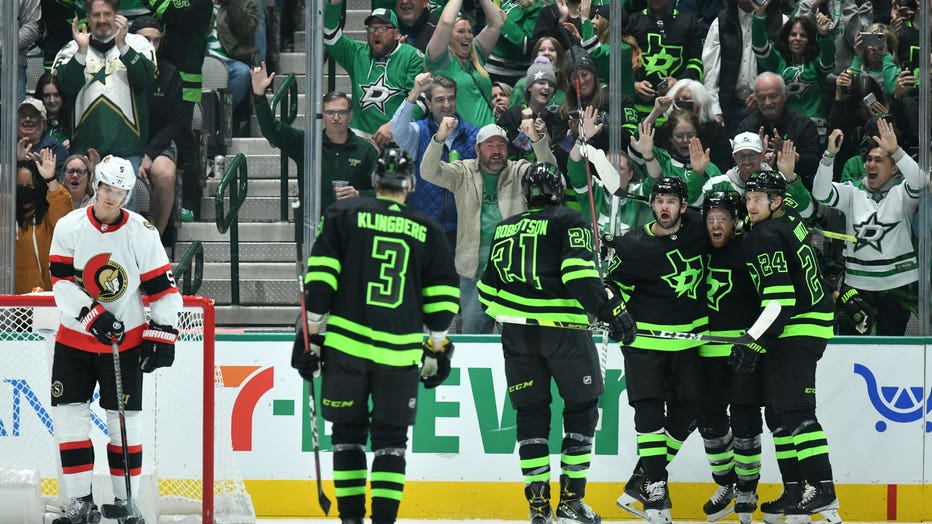 Dallas had an 11-2 advantage in shots on the goal in the second, but still trailed 3-1.

Ottawa added another goal at 5:07 of the third. Brown scored from just to the left of the net on a pass from Victor Mete.

NOTES: Dallas defenseman Jani Hakanpaa did not play after entering the NHL's COVID-19 protocol. ... The Senators Artem Zub, who assisted on Norris's second goal, and Tim Stutzle, who assisted on Brown's, also made their U.S. NHL debut. ... Dallas went 0-1-1 in a two-game home stand despite outshooting Vegas and Ottawa by a combined 73-45.

Senators: Play at Chicago on Monday in the second game of a three-game trip.

Stars: At Winnipeg on Tuesday to begin a three-game trip.