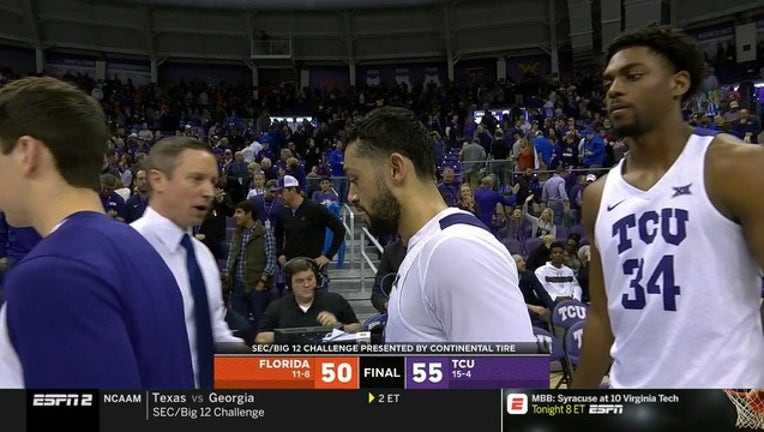 FORT WORTH, Texas (AP) -- Kouat Noi scored 22 points for TCU after outscoring Florida for most of the first half and the Horned Frogs never trailed in a 55-50 win in the SEC/Big 12 Challenge on Saturday.

The Gators (11-8) started the game 1-of-15 shooting and were down 18-3 more than midway through the first half. After they came back and tied the game for the last time with about 12 1/2 minutes left, Noi scored the next five points to put TCU back ahead to stay.

KeVaughn Allen had 11 points for the Gators, which trailed by as many as 16 points before halftime.

Florida finally tied the game at 34-34 on a 3-pointer by Andrew Nembhard, who then had a bounce pass to Kavarrius Hayes for a layup for a 36-all game. But Florida then went almost five minutes before scoring again.

Noi made a tiebreaking layup and then a 3-pointer from the right corner, at almost the same exact spot his cousin, Lat Mayen, hit a 3 on the next TCU possession.

Noi scored the game's first seven points, and outscored Florida all on his own until Jalen Hudson's 3-pointer with 6:52 left in the first half got the Gators within 20-11. Noi had 11 points then, and the Gators didn't have more until their next basket more than three minutes later.

Florida: This was the Gators' first loss in four SEC/Big 12 Challenge games with Mike White as their coach. They were back in North Texas, where last March they played in the NCAA Tournament.

TCU: The Frogs won despite shooting only 36 percent (18 of 50) and with only 10 assists. They had 12 turnovers after halftime. TCU improved to 4-2 in the SEC/Big Challenge after losing the last two years to Vanderbilt and Auburn.

TCU plays its next two games on the road without leaving the state of Texas. The Frogs play Monday night at Texas Tech and next Saturday at Baylor.