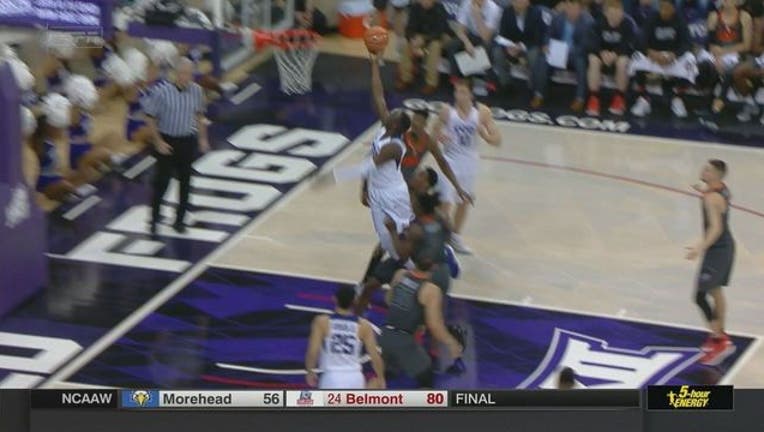 Kenrich Williams scored 14 of his 16 points in the second half for the Horned Frogs, while Vladimir Brodziansky added 14 points. Ahmed Hamdy-Mohamed had 12 points, while Alex Robinson scored 11 and Desmond Bane 10.

Kendall Smith led the Cowboys with 21 points, 14 in the second half. Mitchell Solomon scored the first seven points of the game and finished with 13.

The Horned Frogs missed their first nine field-goal attempts in the first five minutes while Oklahoma State built a 14-2 lead. For the final 15 minutes of the half, TCU was 13 for 19 (68 percent).

The Cowboys still led 24-15 midway through the first half before TCU went on a 14-4 run to take the lead for the first time.

The lead changed hands five times before the Horned Frogs left with a 39-36 halftime lead. Noi had 11 points and six rebounds to lead TCU at intermission.

Solomon didn't score again in the first half after his game-opening spurt. He played just six minutes and was one of three Oklahoma State players with three fouls before halftime. At 6-foot-9, he's the tallest starter for the Cowboys, who had difficulty stopping 6-11 Brodziansky and 6-10 Hamdy-Mohamed inside.

Hamdy-Mohaed missed his first five free throws before sinking four in a row within 32 seconds for a 35-32 TCU lead late in the first half. The Egyptian graduate transfer from Virginia Commonwealth had made 34 of first 41 this season but was in a 3-for-14 slump after Saturday's five misses.

Oklahoma State: The Cowboys' NCAA Tournament hopes took another hit with their sixth loss in eight games. After playing seventh-ranked Texas Tech, OSU's three remaining games are against Big 12 teams it beat the first time through the schedule.

TCU: The Frogs enhanced their chances for an NCAA Tournament bid. They still must play Texas Tech, a Big 12 co-leader, in the final regular-season game.