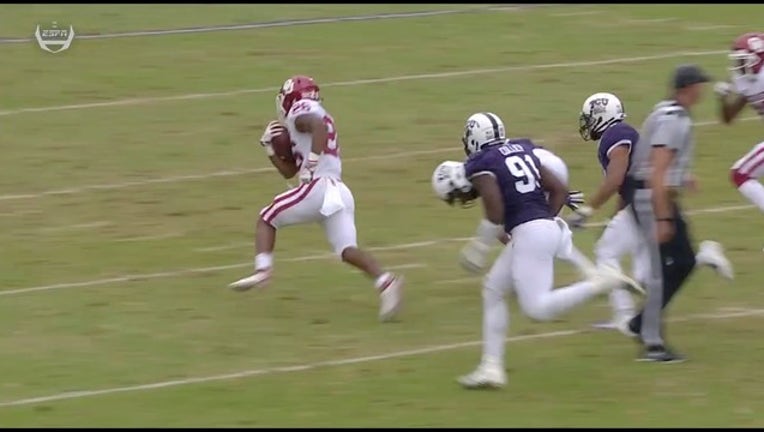 FORT WORTH, Texas (AP) - Kyler Murray and the Oklahoma offense piled up yards and scored points like they have been all season.

Kenneth Murray and the Sooners defense did their part as well as ninth-ranked Oklahoma bounced back from its only loss, winning 52-27 at TCU on Saturday in the first game since defensive coordinator Mike Stoops was fired.

"It's real important," said Murray, the linebacker who had a game-high 11 tackles. "It felt like we came out there, flew around, great effort."

While TCU was held to 275 total yards and got its only two offensive touchdowns in a three-minute span after a quarterback switch, Sooners dual-threat quarterback Murray completed 19 of 24 passes for 213 yards and four touchdowns . Kennedy Brooks and Trey Sermon both had 100-yard rushing games with scores.

The Sooners (6-1, 3-1 Big 12) won their 18th consecutive true road game, never trailing after touchdowns on each of their first four drives. They lost their previous game two weeks ago, 48-45 to Texas, despite scoring three consecutive touchdowns in a six-minute span for a tie before the Longhorns won on a last-second field goal.

"It was just perfect how the game unfolded, we came out and played like we were capable of, carrying over some momentum we had," coach Lincoln Riley said.

Brooks ran for 168 yards on 18 carries with an early 21-yard TD on a fourth-and-1 play. Sermon ran 17 times for 110 yards and scored twice before walking gingerly off the field after being tended to by trainers for a lower leg injury with about 8½ minutes left. Riley indicated the injury wasn't serious, saying things "looked promising."

This was a rematch of the Big 12 Conference championship game last December, when Oklahoma won three weeks after beating TCU in the regular season. The Sooners have scored at least 38 points in their last four meetings against Gary Patterson's defense, which entered this game tops in the league allowing only 20 per game.

But so much focus was on the Sooners defense with Ruffin McNeill, Riley's assistant head coach, in his first game as interim defensive coordinator.

"We played much closer to what we're capable of," Riley said.

"I was proud of how the players reacted to that transition," McNeill said. "It was very physical, and very different for them. They handled it with grace, honor and pride. To see them keep their poise when things get tight was great."

The Frogs (3-4, 1-3) were within 31-27 midway through the third quarter when Cole Bunce kicked his second 41-yard field goal but didn't score again.

TCU trailed 28-7 midway through the second quarter when former Penn transfer Michael Collins replaced ineffective starter Shawn Robinson. The Horned Frogs had only 25 total yards before the quarterback switch, and their only score was KaVontae Turpin's 99-yard kickoff return .

"I'm not going to make it about a quarterback controversy," Patterson said.

Collins threw TDs on consecutive passes soon after entering the game. Turpin turned a short throw into a 41-yard touchdown and Jalen Reagor's 33-yard score came after Oklahoma went three-and-out and punted from its own 9 after a sack and two penalties.

"I thought he came in, managed the game pretty good for a guy that hadn't been in that much, and that's a high-level team that he played against," Patterson said.

Oklahoma: The Sooners haven't lost consecutive games in the regular season since 1999, and they still control their path to getting back in the Big 12 championship game - and maybe the College Football Playoff.

TCU: The quarterback situation is now interesting. Patterson for weeks had brought up the idea of Collins playing more, though offensive coordinator Sonny Cumbie made the call for the in-game switch. Collins started 4-of-5 passing for 89 yards and the two TDs, but after halftime he was only 3 for 12 for 53 yards and an interception. Robinson was 3 for 8 for 21 yards and gained nothing on his two carries.

"Going out there and playing for him was definitely something that was on my mind," Kenneth Murray said. "Every time I made a play, I gave a quick gesture up to the sky, because I knew he was going through a lot with his mom and that is something that is tough."

The Sooners will still be a top-10 team.

Oklahoma is home for the first time in nearly a month to play Kansas State next Saturday.

TCU is on the road next Saturday to play Kansas.