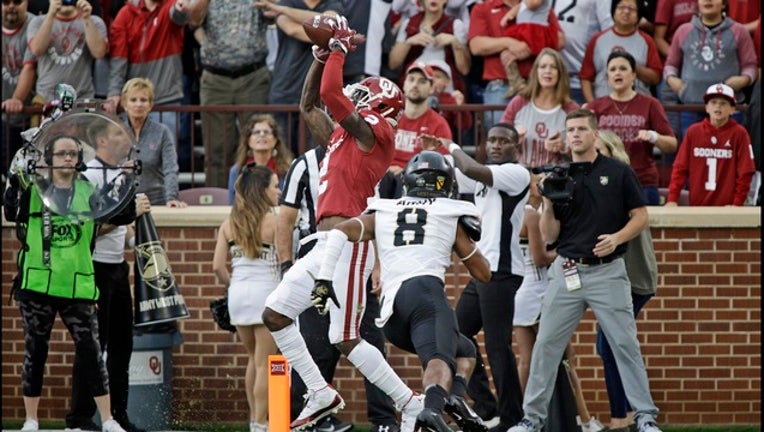 Army had the ball for 44:41 and ran 87 plays to Oklahoma's 40. It was the third-fewest offensive plays for Oklahoma in school history and the fewest since running 38 against Colorado in 1960.

Army coach Jeff Monken said the Black Knights would have gone for two and the win if they had scored a touchdown on their overtime possession. The Black Knights were 4 for 4 on fourth-down conversions until Motley's interception.

Oklahoma's fans gave the Black Knights a standing ovation after the game.

Kyler Murray passed for 165 yards and three touchdowns and ran for 71 yards and another score and Trey Sermon added 119 yards on 18 carries for Oklahoma. Kenneth Murray had a school-record 28 tackles and Curtis Bolton had 23 for the Sooners (4-0). Murray's total is a Football Bowl Subdivision record, though the NCAA only has kept track since 2000.

Hopkins ran Army's triple-option offense to near perfection for most of the game. He ran for 102 yards and a touchdown while constantly fooling the Sooners with his ball handling, but he threw two critical late interceptions.

"This Army team, them boys were tough," Bolton said. "You can say what you want. It's a little outdated, the triple option. But at the end of the day, them boys are out there trying to win a football game. They did a good job. They played a hell of a football game. I'm glad we came out with the W."

Oklahoma led 21-14 at halftime after Army had 16-play, 75-yard touchdown drives on its first two possessions. Kyler Murray passed for 123 yards and two touchdows and ran for 40 yards and another score before the break.

Army picked off Kyler Murray's pass and made the Sooners pay. Andy Davidson scored from 3 yards out, and the Black Knights tied the game at 21 with 1:51 remaining in the third quarter. It was a 19-play, 85-yard drive that took 10:47 off the clock.

Oklahoma drove to the Army 1, but the Black Knights got the stop on fourth-and-goal and took over with 12:23 to go.

Army drove for the win, but Oklahoma's Mark Jackson pressured Hopkins, and defensive end Kenneth Mann caught a deflection to give the Sooners the ball at their 38-yard line. The Black Knights took 10:06 off the clock before turning the ball over.

Kyler Murray ripped runs of 18 and 10 yards to get the Sooners into field-goal range. An option pitch to Sermon for 11 yards and an 8-yard run by Kyler Murray moved it even closer. The Sooners then took a knee to set up the field goal try, but Austin Seibert missed from 33 yards out as time expired to force overtime.

Army: The Black Knights improved significantly from their first three games and should be confident against any team on their schedule. Their offensive execution was nearly flawless, and their defense did just enough to keep them in the game.

Oklahoma: The Sooners could not get Army's offense off the field. The good news is they won't face another offense like the Black Knights all year.

The Sooners likely will drop a few spots after this one. As solid as Army is, the respect for the Black Knights isn't great enough for the Sooners to avoid being punished for the close call.

On Saturday, he was back in Norman, exhorting the crowd. Last year's Heisman Trophy winner drew one of the loudest cheers of the night when he was shown on the big screen.

The last time Oklahoma had two players with 20 or more tackles in a game was against Texas in 1974. Dewey Selmon had 22 and Rod Shoate had 21.

Army travels to Buffalo on Saturday.