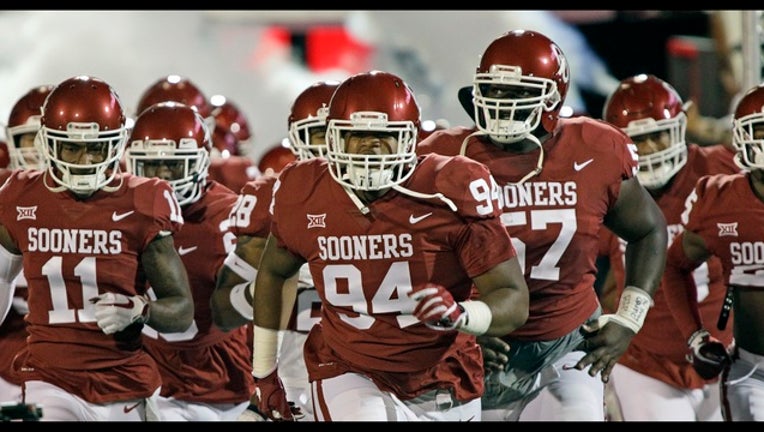 It's tough not to when everything appears to be stacked in your favor.

The Sooners (9-1, 6-1 Big 12) are coming off a 38-20 win over TCU on Saturday that put them in sole possession of first place in the Big 12. Notre Dame's loss to Miami and Georgia's loss to Auburn over the weekend solidified Oklahoma's already strong position in the College Football Playoff picture. The Sooners moved up from No. 5 to No. 3 in the AP poll this week, and a similar jump from No. 5 could follow when the CFP rankings are revealed.

Oklahoma is aware of its position, but the Sooners want to focus solely on playing at Kansas (1-9, 0-7) on Saturday. The fact that they Jayhawks have lost nine straight, all by double digits, doesn't matter to Oklahoma quarterback Baker Mayfield.

"We haven't won the Big 12 yet," he said. "They're a Big 12 opponent that's in the way of our goals, so it shouldn't take any extra motivation. We have to have the same mindset no matter who we're playing against. That's kind of been our focus all year - it doesn't matter who we're playing, we have to rise to the occasion and play well, week in and week out."

The Sooners have quality road wins against Ohio State and Oklahoma State and the home victory over TCU. Their only loss was to an Iowa State squad that is already bowl eligible. The Sooners appear headed to the playoff if they can beat Kansas and West Virginia then win the Big 12 Championship Game.

"I keep going back to I have confidence in this league and the strength of this league," Oklahoma coach Lincoln Riley said. "If you take care of business in this league, then all that other stuff will work itself out."

Mayfield said the Sooners aren't celebrating the losses by Notre Dame and Georgia.

"It just shows that you don't take care of business on Saturdays, you're not going to be in that talk anymore," Mayfield said. "For us, that doesn't have to be us. We can learn from watching those two teams. Just the fact that we've got to win - it doesn't matter who you're playing - and you're going to get everybody's best shot this late in the year, so we've got to be ready to bring ours too."

Many of the Sooners players weren't on the 2015 team that reached the playoff. Mayfield said he's trying to keep the newest players focused.

"The big thing is we can't let anything on the outside determine how we're playing," he said. "We set our own expectations."

The loss to Iowa State earlier this season also serves as a reminder heading into the Kansas game. Though the Sooners have won the past 12 games against the Jayhawks by at least 15 points, they had similar success against Iowa State over the years before a 38-31 loss this season .

"We can't overlook any team,'" Parker said. "I believe that we won't. Record doesn't matter - anybody can be beaten. We know that. We've seen it firsthand."