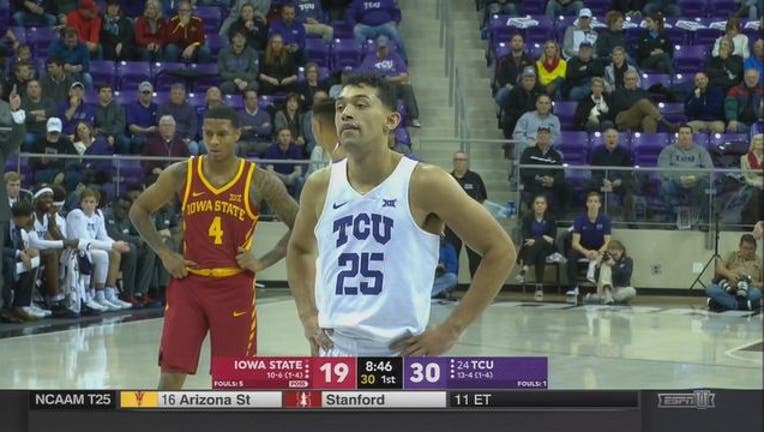 FORT WORTH, Texas (AP) -- Vladimir Brodziansky had 26 points and No. 24 TCU snapped a three-game losing streak with a 96-73 win over Iowa State on Wednesday night, when the Horned Frogs played for the first time without injured starting point guard Jaylen Fisher.

Alex Robinson, who started at point guard, scored eight points and had a school-record 17 assists for the Horned Frogs (14-4, 2-4 Big 12), who never trailed and shot 60 percent from the field. He had only one turnover in 38 minutes.

Brodziansky shot 11 of 13 for his third 20-point game in five games. JD Miller added 21 points on 8-of-12 shooting with five 3-pointers. Kouat Noi scored 16 points and Kenrich Williams had his eighth double-double with 11 points and 11 rebounds.

Fisher was scheduled to have surgery Thursday, two days after injuring his right knee during practice. The sophomore guard missed the team's trip to Australia in August after tearing meniscus in his left knee during practice then, but was back for the start of the season after surgery.

Robinson's 12th assist, surpassing his previous career high of 11, was on pass to Brodziansky for a slam dunk that made it 70-53 with 11:36 left before an Iowa State timeout. That was among many plays applauded by Fisher, who sat in a chair near the TCU bench.

Iowa St.: Even while they shot 51 percent from the field (30 of 59), the Cyclones couldn't gain any momentum coming off their first Big 12 victory Saturday against Baylor. Wigginton, the freshman who was the Big 12 newcomer of the week after games with 30 and 27 points last week, had only two points at halftime after he got two fouls in the first 9 minutes.

TCU: After so many close games, including consecutive overtime losses on the road last week, the Frogs finally had a game in which they didn't have to press in the closing minutes. Their four Big 12 losses are by a combined 11 points, and their only previous conference win was by three points in overtime.

Iowa St.: Another ranked opponent for the Cyclones, who host No. 8 Texas Tech on Saturday.

TCU: The Horned Frogs play three of their next four games on the road. They are at Kansas State (13-5, 3-3) on Saturday.