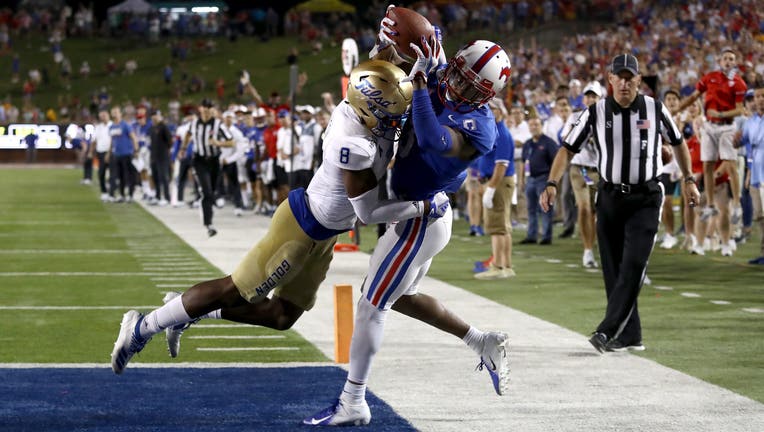 DALLAS - No. 19 SMU got a chance to take its breath right in the middle of its best season since the Pony Express days.

That open date came at a perfect time for the Mustangs (6-0, 2-0 American), right after an incredible three-touchdown comeback in the fourth quarter of what became a three-overtime victory over Tulsa two weeks ago.

While the Mustangs are off to their best start since resuming play in 1989 after the NCAA death penalty and a two-year hiatus from games, they are only halfway through the regular season. They still have the bulk of their conference schedule to play, including Memphis -- which was ranked and undefeated before losing at Temple last week -- Navy and West Division co-leader Tulane.

"It's hard not to look at it, all the way through and say, `Wow, we're going to play a lot of good football teams,' and a bunch of teams that have had a lot of success," Dykes said. "The one thing that's getting ready to happen with our league is kind of what happened last week, where you've got two really good teams playing each other ... teams are going to start knocking each other off in the league."

Like Temple did last against then-No. 23 Memphis, winning 30-28 after building an early 16-0 lead. The Owls have won their last five conference games.

Both SMU and Memphis have high-scoring, big-gaining offenses with two of the league's most efficient passers (SMU's Shane Buechele leads the league with 277.5 yards per game) and running backs who average more than 100 yards a game. The Mustangs also feature receivers James Proche (AAC-high 7.5 catches a game, third with 88.2 yards receiving per game) and Reggie Roberson Jr (90.8 yards per game).

"They do it so different," first-year Temple coach Rod Carey said of the Mustangs and Tigers. "I think the fact that they're explosive gets your attention when you watch the film and you see them, run the ball, throw the ball, execute at a high level. But both teams do it so different that really the carryover, there's not a ton there."

Temple already has two wins over ranked teams, the first time the Owls have defeated two Top 25 teams in the same season.

After winning 20-17 over then-No. 21 Maryland on September 14, the Owls lost at Buffalo the following week.

Re'Mahn Davis has 575 yards rushing for Temple, the most for an FBS true freshman. ... Temple and SMU are among three AAC teams with multiple players averaging at least 100 all-purpose yards per game: WR Isaiah Wright (125.8 ypg) and Davis for the Owls; RB Xavier Jones (115.5 ypg) and Proche (100 ypg) for the Mustangs.

ON THE OTHER SIDE

"I'm sure Temple will have a plan to adjust what they need to adjust, as we will as well," Dykes said. "At the end of the day, the players decide the game. ... That stuff gets blown out of proportion."

LOT OF POINTS AFTER ALL TIED UP