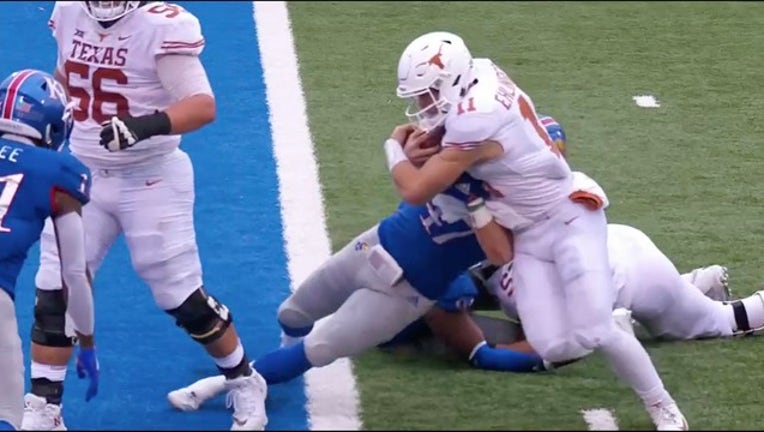 LAWRENCE, Kan. (AP) - Sam Ehlinger threw for two touchdowns and ran for a score, and No. 11 Texas held off Kansas 24-17 on Friday to clinch a spot in the Big 12 title game.

The Longhorns opened a 24-7 lead on Cameron Dicker's 34-yard field goal in the fourth quarter, but the lowly Jayhawks responded with Peyton Bender's 31-yard touchdown pass to Daylon Charlot and recovered the ensuing onside kick.

After Gabriel Rui made it a one-score game with a 45-yard field goal with 1:37 remaining, Kansas was unable to recover another onside kick and Texas (9-3, 7-2, No. 15 CFP) closed out its third consecutive victory.

Ehlinger threw two interceptions, but he made enough plays to get another win. The Longhorns had a 98-yard drive on their first possession that ended with a 26-yard touchdown pass from Ehlinger to Collin Johnson.

Texas' offense struggled for much of the first half, and then got back on track in the third quarter. Watson's 31-yard run helped set up Andrew Beck's 5-yard touchdown reception, and Ehlinger's 3-yard TD run made it 21-0 with 1:02 left.

Texas: It was a sweet day for the Longhorns after its 2016 loss at Memorial Stadium ended a string of 13 consecutive wins over the Jayhawks, likely sealed the fate of embattled coach Charlie Strong and ultimately led to Herman's hiring away from Houston.

Kansas: Fails to send Beaty off with a win, capping another losing season.

Texas: Will face the winner of Friday night's showdown between No. 6 Oklahoma and No. 12 West Virginia in the Big 12 championship.