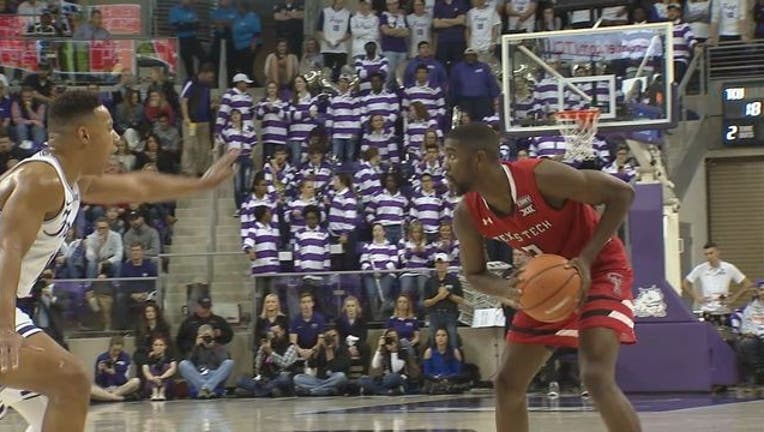 FORT WORTH, Texas (AP) - Jarrett Culver scored 20 points with four 3-pointers, and No. 10 Texas Tech beat TCU 83-71 on Saturday for its fourth straight victory and a share of the Big 12 Conference lead.

Culver, Tech's hometown freshman guard, made all of his 3s in the first half. That included consecutive baskets from beyond the arc in an 18-0 run that put the Red Raiders (19-4, 7-3 Big 12) firmly in control - even without top scorer Keenan Evans taking a shot in that stretch.

Evans still finished with 17 points and six assists , while Zhaire Smith had 12 points.

Desmond Bane's three-point play for TCU (16-7, 4-6) tied the game at 9 before the big run the next 4 minutes by Texas Tech, which started the second half of league play by matching Kansas atop the standings after the Jayhawks lost at home earlier Saturday against Oklahoma State.

Vladimir Brodziansky led TCU with 18 points, while Bane had 13. Kenrich Williams had 12 points and 13 rebounds.

Evans entered the game as Tech's top scorer, and second in the Big 12 behind Oklahoma freshman Trae Young, at 18.6 points per game. His first shot against TCU didn't come until there were 6½ minutes left in the first half, and his first make 2 minutes later was a 3-pointer for a 37-18 lead.

The Red Raiders led 48-24 at halftime after Evans made a buzzer-beating jumper, just three days after his winning shot against Texas at the end of overtime.

Texas Tech: The Red Raiders have already surpassed last year's win total of 18 with a month left in the regular season. They already have a win at Kansas, and host both the Jayhawks and No. 12 Oklahoma in February.

TCU: The Horned Frogs have alternated wins and losses for three straight weeks since starting point guard Jaylen Fisher's season-ending left knee injury. But they hadn't been outplayed like this all season. Their first six losses had been by a combined 19 points, an average of 3.2 per game.