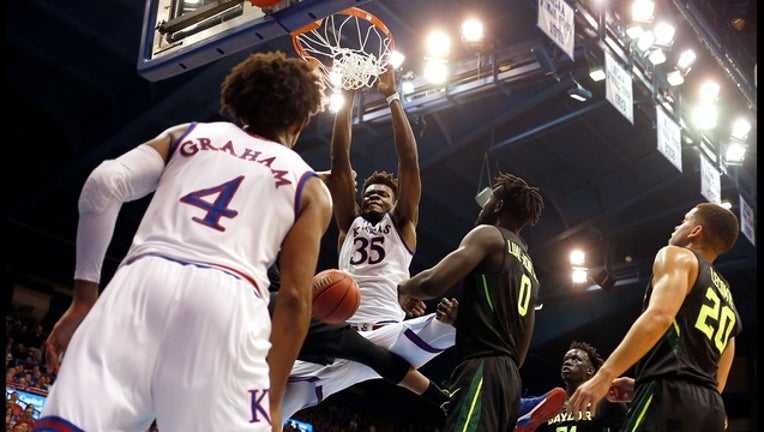 Udoka Azubuike #35 of the Kansas Jayhawks dunks during the game against the Baylor Bears at Allen Fieldhouse on January 20, 2018 in Lawrence, Kansas. (Photo by Jamie Squire/Getty Images)

LAWRENCE, Kan. (AP) - Malik Newman scored seven of his game-high 24 points in the closing minutes, Baylor turned the ball over on the final inbounds play and Kansas rallied to beat the Bears 70-67 on Saturday night.

The Jayhawks (16-3, 6-1 Big 12) trailed 67-61 with 2:05 to go before Newman went on his scoring binge, giving them the slimmest of leads again. The Bears (12-7, 2-5) had a couple of chances after that, but Manu Lecomte missed a 3-pointer and his layup attempt high off the glass with three seconds left was no good.

Devonte Graham added a pair of free throws before Baylor squandered a chance at the final shot.

It was the Jayhawks' 11th consecutive win over the Bears, who have never won in 16 tries in Lawrence. It was also the closest Baylor has come during any of those games.

Graham finished with 15 points, eight rebounds and seven assists. Udoka Azubuike had 14 points and seven boards, but he was just 4 of 11 from the foul line and missed two crucial ones late.

Jo Lual-Acuil Jr. had 14 points and 12 rebounds before fouling out for Baylor. Nuni Omot added 14 points and Lecomte had 10, though he was just 3 of 12 from the floor and 1 of 8 from beyond the 3-point arc.

Allen Fieldhouse has been Baylor coach Scott Drew's personal house of horrors - the closest he had come to winning had been the Bears' 73-68 loss last season. And when the Jayhawks opened the game by making their first seven shots and taking an 18-5 lead, it looked as if this one would be no different.

It took Drew burning through nearly all his timeouts to settle Baylor down.

Shots eventually stopped falling for Kansas as the Bears picked up their defensive pressure, and their deficit dwindled to 32-26 before a late flurry left them in a 38-27 halftime hole.

Kansas began the second half determined to get Azubuike the ball in the paint, and he made good on his first couple of chances. But when he failed to execute a few times in a row, coach Bill Self greeted him during a timeout with, "Are you kidding me?" - spiced up with an extra word.

The Jayhawks still led 52-47 midway through the second half when Baylor went on a 16-4 run.

Omot started it with a bucket in the paint, but it was seven free throws by the senior forward that did the real damage. Lual-Acuil's basket with 4:39 left gave Baylor a 61-56 advantage.

The Bears scored on nine consecutive possessions down the stretch.

Newman finally turned the momentum, though. He converted a three-point play and scored on a nifty drive on a run-out, then knocked down another basket to give Kansas a 68-67 lead with a minute left.

Kansas honored two-time All-American Jo Jo White with a video tribute before tipoff. The seven-time NBA All-Star, whose jersey hangs from the Allen Fieldhouse rafters, died Tuesday at the age of 71.

Kansas freshman Billy Preston signed with a pro team in Bosnia on Friday, ending any chance the five-star prospect will play for the Jayhawks. Preston had been held out all season while the school looked into the finances of the car he was driving during a November accident.

Baylor has lost its last five games to the Jayhawks by a combined 20 points, no doubt adding to Drew's frustration. Six of the Bears' seven losses this season have come against ranked teams.

Kansas has won five straight to grab ahold of the Big 12 race, though none of them have been very comfortable. The Jayhawks' winning streak has been by a combined 18 points.