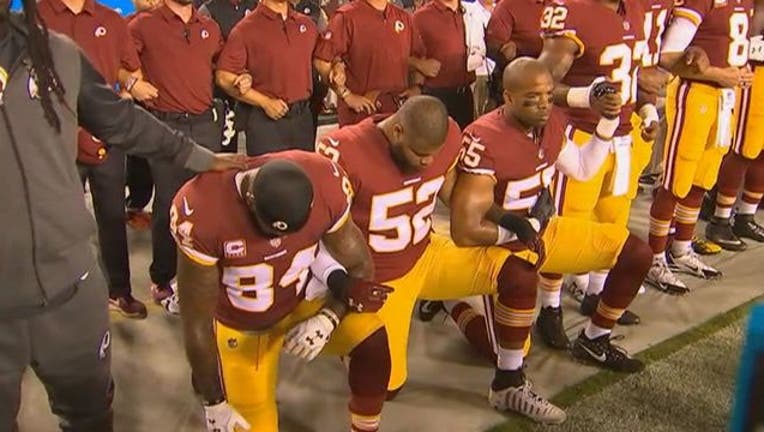 MINNEAPOLIS (AP) - The NFL has denied advertising space in the Super Bowl program for a veterans group that declined to alter language about standing for the national anthem.

NFL spokesman Brian McCarthy confirmed Tuesday that American Veterans, or AMVETS , submitted an advertisement last week to the third-party publisher of the game program with the message, "Please Stand."

McCarthy said the league, which has editorial control over the content, asked AMVETS to consider other options for the message, such as "Please Honor our Veterans" or "Please Stand for our Veterans." The two organizations were unable to agree on language in time to meet production deadlines. McCarthy said a separate ad from the Veterans of Foreign Wars group with the words "We Stand for Veterans" was approved.

Some NFL players have taken to kneeling during the national anthem over the last two seasons to raise awareness of social and racial injustice, issues that created division within the league. The NFL announced Tuesday that an owner-player committee was being created to try to address them.

"Freedom of speech works both ways. We respect the rights of those who choose to protest, as these rights are precisely what our members have fought - and in many cases died - for," Polk said in his letter to Goodell. "But imposing corporate censorship to deny that same right to those veterans who have secured it for us all is reprehensible and totally beyond the pale."

AMVETS said the same ad was accepted by the NHL and NBA for use in official programs for their All-Star Games.

McCarthy said the NFL game program has "never been a place for advertising that could be considered by some as a political statement. The NFL has long supported the military and veterans and will again salute our service members in the Super Bowl with memorable on-field moments that will be televised as part of the game."

The New England Patriots will play the Philadelphia Eagles in the Super Bowl in Minnesota on Feb. 4.