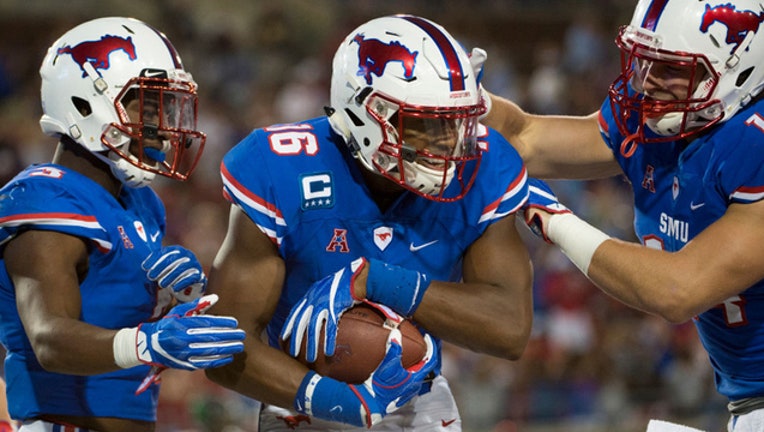 Courtland Sutton #16 of the SMU Mustangs celebrates with teammates James Proche #3 and Ryan Becker #14 after scoring a touchdown against the North Texas Mean Green during the second half at Gerald J. Ford Stadium. (Photo by Cooper Neill/Getty Images)

A look at the top prospects available at each position in the upcoming NFL draft (x-denotes early entrant):

Strengths: Excellent arm, good size and can make accurate throws - or the occasional positive run - when the pocket breaks down. Works his progressions.

Fact: His grandfather, Dick Hammer, was an Olympic volleyball player and an actor who played the Marlboro Man.

Gone by: Top five or so.

Strengths: Accuracy, competiveness, and command of the offense. Gets the ball out quickly and decisively.

Weaknesses: Undersized. Elusiveness and mobility that was a plus in college might not translate to the NFL.

Fact: Went from walk-on to 2017 Heisman Trophy winner. Plus, had two other top-five Heisman finishes.

Weaknesses: Accuracy and ability to change speed on his throws while still being on target.

Fact: Had no major college scholarship offers coming out of high school.

Strengths: All the arm a team would need, plus speed and elusiveness unlike anything the NFL has seen from a top quarterback prospect since Mike Vick.

Strengths: Size, strength, and ability - and willingness - to throw deep.

Weaknesses: Limited mobility. Was asked to make limited reads in the offense.

Fact: Completion percentage and yards per pass increased each of last three seasons.

Gone by: Early second round, but could be sixth first-round QB.

Position outlook: Saquon Barkley is the No. 1 player on a lot of experts' boards, but there are several backs that could provide great value outside the first 20 picks.

Weaknesses: The one knock: He needs to use that power to run through more tacklers and push piles forward.

Fact: Ran for 3,638 yards in four seasons at Georgia while mostly sharing carries with Nick Chubb.

Strengths: Runs violently once he breaks the line of scrimmage and has breakaway speed.

Weaknesses: Some durability concerns. Might not be a three-down back.

Weaknesses: His style at that size could limit him in NFL.

Position outlook: No first-round locks, but expect at least one or two to go on Day 1.

Strengths: Game-breaking speed and explosive out of his cuts.

Weakness: Slender. Can he play through contact at the line?

Fact: Surpassed 1,000 yards receiving as a freshman, but limited passing game by Alabama held his numbers down in 2016 and '17.

Fact: Was recruited as a defensive back out of high school.

Gone by: A need-and-fit pick who could slip to third round.

Strengths: Elusive after the catch. Excelled with underwhelming quarterback play.

Fact: Big Ten receiver of the year in 2017 while catching passes from four quarterbacks.

Strengths: Good hands and slippery runner. Could be a game-breaking return man.

Weakness: Size could limit him to slot receiver.

Fact: Returned six punts and one kickoff for touchdowns in three seasons at A&M.

Position outlook: Some intriguing athletes and potential receiving mismatches, but no early-off-the-board picks.

Fact: A highlight-reel dunker on the basketball court.

Strengths: Was used effectively all over the field.

Weaknesses: Needs to refine route running and be a more physical blocker.

Weaknesses: At 24, concerns that he has limited ceiling.

Fact: Drafted by the Pittsburgh Pirates in the 17th round in 2012, played two seasons of minor league baseball before college football.

Position outlook: A lack of clear left tackle prospects and some tackles who might have to move to guard.

Weaknesses: Could use more bulk and might be better suited for right tackle.

Fact: Only played one season at left tackle in college.

Strengths: Good footwork and strong technique with his hands.

Weaknesses: Size and power issues have led to projections as a guard.

Fact: Missed much of last season with a knee injury, but played like an elite prospect in 2016.

Strengths: Massive man who plays with a healthy mean streak.

Weaknesses: Lacks athleticism across the board.

Gone by: Bad combine. Better pro day. Difficult to predict when he goes. Late Round 1? Day 3?

Strengths: Gets good push off the line as a run blocker.

Weaknesses: Pass protection technique could land him at guard.

Fact: A foot injury cost him much of his junior season or he would likely already be in the NFL.

Position outlook: Not a position that NFL teams see as great draft value, but the top players here are probably better prospects than the top tackles.

Strengths: Maybe the most likely to succeed of any player in this draft class. Powerful, tenacious and sound.

Weaknesses: Not much to complain about. Could do better at getting off the line and getting to second level.

Fact: Watch Nelson block and expect to see plenty of defenders being pushed to the ground.

Gone by: Pick 10. And that would probably be about five picks too low.

Strengths: Quick feet for a massive and powerful player.

Weaknesses: A little short in height and arm length.

Weaknesses: Power to drive defenders off the line could use improvement.

Fact: Played left tackle last season and did it well, but that height makes him an NFL guard.

Gone by: Versatility gets him off the board in top 75 picks.

Position outlook: A few low-risk prospects who could step into starting roles right away.

Strengths: Very strong. Very aggressive. Played at lot of guard with the Buckeyes, too.

Weaknesses: That aggressiveness can lead to sloppiness.

Strengths: Quick off the line and into linebackers.

Weaknesses: Straight-up, one-on-one power could be a problem.

Fact: Ragnow's father, Jon, died of a heart attack during the 2016 football season. Frank managed to play, and play well, through the season.

Gone by: End of third round.