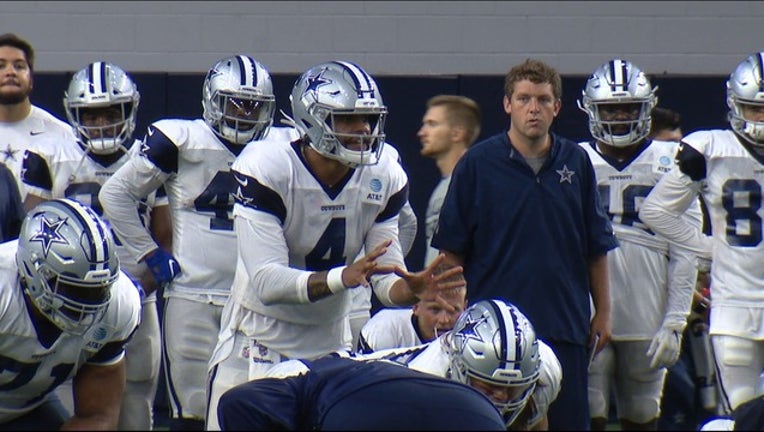 While Dak Prescott and Amari Cooper wait to get paid, Ezekiel Elliott wants his money now.

The Dallas Cowboys have another obstacle standing in their way as they try to become the first team to win consecutive NFC East titles since the Philadelphia Eagles did it four straight seasons from 2001-04. Contract issues could knock Dallas off track.

Elliott, the two-time NFL rushing champion, has been holding out for a new deal before he enters his fourth season. He's due to make $3.9 million this year and $9.1 million in 2020. Elliott could eventually end up the highest-paid running back in league history if the two sides agree.

Prescott has led the Cowboys to a pair of division titles in three seasons, but watched Carson Wentz get a $128 million contract extension from the Eagles despite finishing the last two seasons on the sideline while Nick Foles led Philadelphia to four playoff wins, including a Super Bowl title.

Prescott is willing to play for his $2 million base salary knowing he's going to get a deal likely worth in the area of $30 million annually. Cooper also is content entering the final year of his rookie deal because he will make nearly $10 million.

"I want to be a Cowboy forever, the people doing the deal feel the same way, so there's no rush," Prescott said in the spring. "I know it'll get done. It's all generational money, life-changing money. I know I'll get taken care of."

The NFC East is a two-team race between Dallas and Philadelphia. The Eagles have a stacked roster, but their biggest question centers on Wentz's health. He tore his ACL in 2017 and suffered a back injury in 2018. Foles is in Jacksonville now, so the luxury of having a Super Bowl MVP backup is gone. Wentz arrived to camp in the best shape of his life and has plenty of talent surrounding him on offense.

"I think we have the ability to do something really special with this group, but it's going to take a lot of work," Wentz said.

Things to know about the NFC East:

If Wentz stays healthy and plays like he did in 2017 when he finished third in NFL MVP voting, the Eagles should have one of the league's most powerful offenses. The addition of wide receiver DeSean Jackson to join Alshon Jeffery and Nelson Agholor gives the team a deep threat who will open the field underneath for everyone else. Rookie wideout J.J. Arcega-Whiteside has Jeffery's jump-ball skills. Tight ends Zach Ertz and Dallas Goedert may be the best 1-2 tandem in the league. The run game should be improved with Jordan Howard's arrival from Chicago and rookie Miles Sanders, who has shined in camp.

Cowboys coach Jason Garrett enters the final year of his contract and has two playoff wins in nine seasons. With or without Elliott, he has to win now or owner Jerry Jones will have to make a tough decision. He's got the players on offense to help him. Prescott thrived once Cooper arrived last October, but was sacked 56 times, second most in the league. The return of center Travis Frederick should bolster a unit that includes six-time Pro Bowl left tackle Tyron Smith and five-time Pro Bowl right guard Zack Martin. There's so much potential on offense that tight end Jason Witten left the "Monday Night Football" broadcast booth after one year to return for his 16th season.

ALL ABOUT THE YOUNGSTERS

Rookie Dwayne Haskins, veteran Case Keenum and longtime backup Colt McCoy are competing to be Washington's starting QB. Haskins, the 15th overall pick in the draft, may not be under center Week 1 but is expected to see plenty of action. The Redskins have another exciting rookie first-round pick to watch, defensive end Montez Sweat, and everyone is waiting to see second-year running back Derrius Guice return from a knee injury that cost him his rookie season. Coach Jay Gruden is on the hot seat and his job status could hinge on the development of the young players.

The New York Giants drafted Eli Manning's eventual successor with the sixth overall pick, but it's uncertain when Daniel Jones will take over. The 38-year-old Manning hasn't won a playoff game since winning his second Super Bowl in February 2012 and is nearing the end with a rebuilding team. Odell Beckham Jr. is gone, one of several unpopular moves by general manager Dave Gettleman. At least the Giants have Saquon Barkley. The dynamic second-year running back is worth the price of admission and can almost help the team pull off upsets by himself.