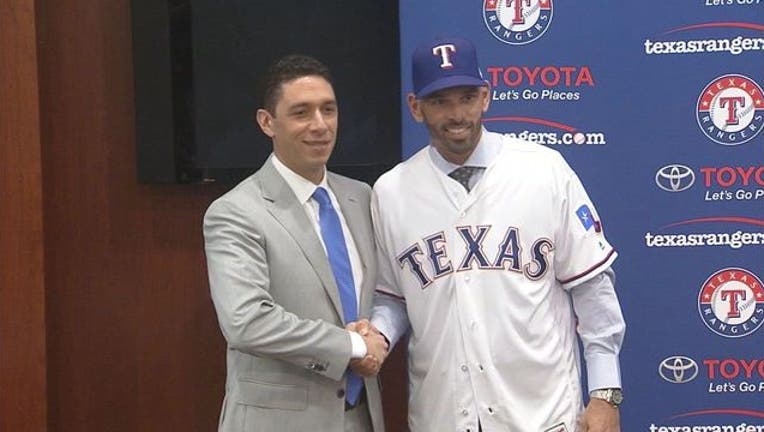 ARLINGTON, Texas (AP) - Chris Woodward grew up wanting to be an architect or an engineer. He also had what he thought was a far-fetched dream of playing professional baseball.

The kid from California who was a 54th-round draft pick and went on to play 12 major league seasons as a utility infielder for five teams is now the manager of one of the youngest teams in the majors. The Texas Rangers formally introduced Woodward as their new manager Monday, two days after hiring the Los Angeles Dodgers third base coach.

"I share a common bond with most Rangers fans right now. This has actually taken away the sting of losing two World Series in a row," Woodward said. "A lot of Rangers fans, obviously I feel your pain, it's real, I get it. ... I know how to get to the World Series. I'm going to instill a philosophy and a belief and a process in place to get us to that point."

Woodward's introduction as a first-time big league manager came just more than a week after the Dodgers lost in the World Series for the second year in a row. Texas had been the last team to do that, in 2010 and 2011.

The Rangers are coming off consecutive losing seasons for the first time since 2005-08. They lost 95 games this year when the focus turned the development of younger players - seven position players 25 or younger played at least 106 games.

"Ideally what we're putting in place here is the beginning of the foundation of a championship belief and culture," Woodward said. "I don't know how many wins we're going to have next year but that championship belief, I believe, is powerful and it's important to instill in these younger players now."

General manager Jon Daniels described the 42-year-old Woodward as an "energetic, winning manager to help us drive the culture here at the major league level. We're all going to grow together, we're all going to win together."

Daniels said the Rangers met with or spoke by phone with about 15 candidates after Jeff Banister was fired Sept. 21. Texas won AL West titles in Banister's first two seasons (2014 and 2015).

As a player, Woodward spent parts of 12 seasons (1999-2011) with Toronto, the New York Mets, Seattle, Atlanta and Boston. He hit .239 with 33 home runs and 191 RBIs while playing every position except pitcher and catcher. Woodward said he played for 11 different managers during his career, several of them first-year managers. He also played for Bobby Cox one season in Atlanta.

His coaching career began as a minor league infield coordinator for the Mariners in 2013 and he joined their big league staff later that year. He spent the past three seasons on Dave Roberts' staff in Los Angeles.

Woodward said he wants to create a culture where players can learn and grow every single day. He said that is what he will place the most value on moving forward.

"Process is a big one for me, I don't like to think of results," he said. "I think young kids, young players nowadays, they get caught up in results. ... I want to drive home the process that's going to get them the results."

Woodward said he had to fight every day as a "very average, probably below average" player and has always had that same kind of energy as a coach. He said it important to relate that to players.

The new manager will wear No. 8, and donned that jersey Monday for the first time in the big leagues. Yes, he was a fan of Cal Ripken Jr. growing up. But that was also the number of Woodward's high school coach Tom Quinley, a Yankees fan who revered Yogi Berra (who also wore No. 8).

"He passed away this past season, and it was very emotional for me," Woodward said. "He took the role of many things for me, obviously as a mentor, as a father figure. He did everything for me. I wouldn't be here today if it wasn't for him. ... It's pretty special to me, and obviously in honor of him."